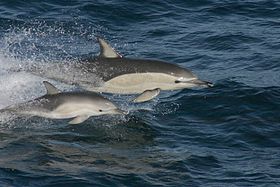 The common dolphin ( Delphinus delphis ), also known as the common dolphin , bears his name because it was the best-known species of dolphins for centuries . The bottlenose dolphin is now better known through the " Flipper " films and dolphinariums , but this species has retained its German name.

The back is black or brown, the belly whitish. On the sides there is an hourglass-like drawing that runs from light yellow to gray. On the slightly notched fluke it is black again. The coloration varies from region to region, so in some populations the drawing of the flanks is completely absent. In its colorfulness, the common dolphin is one of the most colorful representatives of the whales . This dolphin is between 1.70 and 2.40 meters long and weighs 60 to 75 kilograms.

With up to 65 teeth per half of the jaw, the species is one of the most tooth-rich mammals.

The common dolphin has an island-like distribution in various parts of the tropical and temperate latitudes. A contiguous population lives in the Mediterranean , the Black Sea and the north-east Atlantic . Without a doubt, the common dolphin is the most common dolphin around the European continent. A second large population lives in the eastern Pacific . Otherwise common dolphins occur: off the east coast of North and South America; off the coasts of South Africa ; around Madagascar ; off the coast of Oman ; around Tasmania and New Zealand ; in the seas between Japan , Korea and Taiwan . (Distribution maps see below )

As a resident of the open sea, the common dolphin rarely comes near the coast. He prefers water temperatures between 10 and 20 ° C.

Like all dolphins, the common dolphin feeds on fish , sometimes octopus . He is a fast dolphin who often rides the bow waves of ships. Like other species, it forms highly complex social associations that can contain up to a thousand individuals. In the summer these huge groups are split up and the dolphins swim in smaller schools . The group members care for one another. It has been observed that wounded dolphins were supported by their conspecifics while swimming and brought to the surface to breathe.

Dolphin birth can take up to 2 hours. The young come tail fin first so they don't drown when giving birth. Then the mother pushes it to the surface for its first breath. Surrounded by the other members of the school, the giving birth mother is protected from possible shark attacks . The young stay with the mother for about three years, one year of which is suckled. Twin births are rare. If two cubs are born, they usually do not survive long because there is not enough breast milk .

Common dolphins are hunted in some regions of the world. Peruvian fishermen catch them to sell the meat in fish markets. Dolphins have been hunted in the Black Sea for a long time. In most regions of the world, dolphins were never intentionally killed. However, they often perish in fishing nets or get caught in ship propellers. In the 1960s there was a massive population decline in the Mediterranean and Black Seas, the causes of which are still not fully understood. Overfishing and the associated decline in prey as well as the increasing pollution of the oceans, which can weaken the dolphins' immune system, probably play a role. In 2003, the Mediterranean dolphin population was placed on the Red List of Threatened Species as "Endangered". The German author and multiple circumnavigator Rollo Gebhard founded the Society for the Rescue of Dolphins (GRD) in Munich in 1991, which has set up and oversees conservation projects in Peru, Mozambique, but also in the Adriatic.

Distribution of the short-snouted common dolphin

The question of how many species belong to the genus Delphinus has long been a matter of dispute . While most zoologists only recognized one species, the common dolphin, others have described additional species such as the East Pacific Delphinus bairdii and Delphinus tropicalis from the Indian Ocean. A total of about twenty species have been described and then discarded. According to recent morphological and molecular biological studies, the long-snouted common dolphin ( Delphinus capensis ) is mostly recognized as a separate species.