Army of the Republic of Vietnam

Flag of the ARVN

The Army of the Republic of Vietnam ( ARVN , French Armée de la république du Viêt Nam ) was the armed force of South Vietnam . After the end of the Vietnam War in 1975, the army was disbanded and many of the high-ranking officers fled the country. The majority of the soldiers were sent to communist re-education camps after the war ended.

The French colonial administration under Governor Paul Bert began in 1886 to enlist local soldiers on a large scale to pacify the colony. In 1886 these were organized in the Garde indigène . Based on the model of the British Indian Army, local forces were combined with European cadres . These public order units were directly subordinate to the Governor General. In 1900, local Tirrailleur units were set up under army command. However, the Guard continued to exist as the Guard civile . In 1908, Civil Guard units shot down a demonstration against the increase in poll tax in Quang Nam . In both the uprisings of Thai Nguyen and Yen Bai , members of the guard played a leading role in the uprising against the colonial power. After the Second World War , the guards were re-established as the Indochinoise Guard . Part of their units formed the nucleus for the Vietnamese national army in 1949.

On March 8, 1949, Vietnam was officially recognized as an independent state that was closely associated with France . At the end of 1950, the Vietnamese administration was awarded its own armed forces after losing military defeats. Already existing local units were merged with newly established units with the help of non-Vietnamese personnel from the colonial troops. In addition to ground troops , an embryonic air force and a navy were created . The conscription was bypassed by very many conscripts. The army grew significantly by the end of the war and had more men than the French expeditionary corps made up of colonial troops and the Foreign Legion . Around 4,000 French officers and NCOs were seconded to the armed forces as cadres at the end of the war.

In 1952 the army already consisted of 60 battalions , but they played no significant role in the fight against the Việt Minh . Most of the time they were posted to guard duties to clear French troops for fighting. For example, they guarded the DeLattre Line while the French conducted operations in North Vietnam . A few Vietnamese, mainly paratroopers , also fought in the Battle of Điện Biên Phủ , the decisive defeat of the French in Indochina . The army had little popular support as it was viewed as a puppet of the French. Precisely for this reason, attempts have been made again and again to introduce a little nationalism into the army, but this has been largely unsuccessful. The army was generally weakened by desertion and poorly equipped, as the best weapons went to the French.

On July 21, 1954, following the withdrawal of the French, the army was disbanded under the Geneva Agreement negotiated at the Indochina Conference . Only a small militia was allowed as an armed force. In April and May 1955, on the instructions of President Ngô Đình Diệm, it successfully fought the Bình Xuyên , a criminal organization that had monopolized the opium trade in southern Vietnam , initially under the protection of the French .

On October 26, 1956, the military was reorganized by the administration of the South Vietnamese President Ngô Đình Diệm . It was called the Army of the Republic of Vietnam. This time an air force , the VNAF, was also established. From the beginning, the main enemy of the army was the Vietnam National Liberation Front , whose fighters were also called the Viet Cong . These adhered to the communist ideology and tried to overthrow the Diệm regime and reunite all of Vietnam into a communist state. The US under President John F. Kennedy sent military advisers , weapons and large sums of money to Vietnam to support the ARVN in battle. However, coercive measures such as resettlement of the population quickly made the army unpopular. She was also involved in the violent crackdown on protests by religious sects such as the Cao Dai or Hòa Hảo , as they allegedly supported communists. The army even took action against groups supported by France on orders from Diệm.

In 1963 Diệm was killed by ARVN officers during a revolt . In the period that followed, the leadership changed between various ARVN generals, which caused great chaos. At that time, the United States had several air bases in Vietnam. After the Viet Cong had successfully attacked those US bases several times, it became clear that the ARVN could not offer the necessary protection. From 1965, the USA also stationed combat-ready ground troops in Vietnam for the first time. As a result, the US took over the fight against the Viet Cong more and more, which led to the ARVN becoming less and less important. Although the Western media complained about the high level of corruption and desertion in the army, the US continued to support it and rebuilt the army based on the American model.

The role of the ARVN during the Vietnam War is hardly taken into account in the West, since the considerations are mainly limited to the role of the USA. Nevertheless, the ARVN was heavily involved in the conflict and had the most casualties on the anti-communist side in the Vietnam War (250,000 South Vietnamese killed). Even during the war, the ARVN troops often took on important tasks as leaders, security guards or armed interpreters in the combat area.

The beginning of the end

After President Nixon announced the " Vietnamization " of the conflict in 1969 , more and more US forces were withdrawn and the ARVN had to shoulder the brunt of the fighting. It was modernized again and turned into a pure combat army. From 1969 to 1972 the ARVN already had about 20,000 deaths annually, which thinned its ranks considerably, although the army had called up all men capable of weapons from 1968, which in 1972 led to a total strength of one million men. In 1970 they successfully participated in the Cambodia operation and had three times as many missions as during the American phase. Nevertheless, the armament of the ARVN was not ultra-modern, but consisted of remnants of the US Army . The biggest problem, however, remained with the officers and generals, who were corrupt, poorly trained, and ineffective. They found it difficult to lead the army, which led to many desertions . 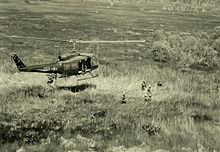 ARVN soldiers leave a helicopter in the summer of 1970

Nevertheless, the ARVN was able to dominate the conflict from 1970, albeit with massive US air support. Victory seemed near at hand, as the north was losing more and more troops and engaged in peace talks. In 1972 the Easter offensive was started, the first attempt to invade South Vietnam . The ARVN suffered heavy losses, but was able to hold its positions for the most part and recapture lost terrain after President Nixon had made more squadrons available. The then ruler of South Vietnam, Nguyễn Văn Thiệu , dismissed his commander in chief and threatened all deserters with the death penalty . So he managed to hold the army together and repel the attack. Only a few areas on the borders remained in the hands of the Viet Cong.

In 1973 and 1974 the US had almost completely withdrawn from the country, but was still sending masses of arms to South Vietnam. The ARVN had four times as many heavy weapons as the Vietnamese People's Army , but the US gave less and less support, while the North received increasing aid from China and the Soviet Union. In the fall of 1974, Nixon was forced to resign, and the new administration cut military aid by hundreds of millions of dollars . This was a severe blow to the country and many historians see it as the cause of the 1975 defeat. Nixon also always announced retaliation if the peace treaty were broken. The new government refrained from doing this, which left South Vietnam defenseless.

The reduction in American funds soon led to the realization in South Vietnam that the country would be conquered by the communists. That is why South Vietnam provoked incidents on the border with North Vietnam in order to motivate the USA again to increase its commitment in South Vietnam. These provocations came in handy in North Vietnam, as it had a reason for its own offensive . The Vietnamese People's Army launched its attack in 1975 to conquer Saigon . The operation was named the Ho Chi Minh Campaign . This time the ARVN had no chance against the Vietnamese People's Army because the Vietnam Air Force could only bring a fraction of the performance of the US Air Force , as it lacked modern fighter planes and bombers that could stop the enemy. Thiệu ordered the withdrawal to the southern areas of the country and accused the US of abandoning his country:

"If [the US] grant full aid we will hold the whole country, but if they only give half of it, we will only hold half of the country."

The withdrawal was a tactical failure, causing mass panic and skyrocketing desertion rates, further weakening the ARVN. This enabled the Viet Cong to conquer one city after another, triggering a large flow of refugees to Saigon. Abandoned by their officers , who preferred to save their own skin, the soldiers tried to get to their families in the chaotic situation and to protect them from the Viet Cong. South Vietnam saw negotiations as the only way out, and after Thiệu resigned, General Dương Văn Minh came to power, who had played an important role in the overthrow of President Diem in 1963. The commander in chief of the ARVN did not want to work with him and resigned - another weakening that left the army leaderless.

In the meantime, the 18th ARVN Division was able to stop the superior opponents one last time in the battle of Xuan Loc and inflict heavy losses on the Vietnamese People's Army. But even she had no chance against the overwhelming superiority. On April 30, 1975, Saigon fell to the communists, who hoisted their flag on the Independence Palace. With the capitulation of the city, the time of the Republic of Vietnam and the Army of the Republic of Vietnam came to an end. When they were ordered unconditional surrender, many ARVN generals committed prefer suicide than surrender.

Commons : Army of the Republic of Vietnam  - Collection of pictures, videos and audio files