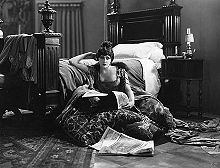 Barbara La Marr , actually Reatha Dale Watson (born July 28, 1896 in North Yakima , Washington , † January 30, 1926 in Altadena , California ) was an American actress, screenwriter and journalist. She also became known under her nickname "The Too Beautiful Girl". From 1920 to 1926 she appeared in almost 30 films.

Barbara La Marr was born to unknown parents and origins. There is no birth certificate. As a one month old baby, she was adopted by the Watson family and named Reatha. Her adoptive parents named North Yakima, Washington, as their place of birth, although she always insisted on Richmond, Virginia, and stated this on every public document, including marriage certificates. As a child and teenager, she was already noticed by her beauty.

The family moved often because Barbara's father, William Watson, worked as a newspaper editor and worked in Portland, Oregon , Tacoma , Washington, DC , among others . In Tacoma, Barbara made her stage debut in 1904 as Eva in Uncle Tom's Cabin . Later, when her parents moved with her to Palmdale in the Imperial Valley , California, she had the opportunity to get to know Los Angeles , which is not far away .

At the age of only 14, she performed there as a burlesque dancer. As a result, she was arrested and tried in juvenile justice. Since she was a minor, her appearances had broken the law. In the course of the court proceedings, the judge certified the young Reatha: “You are too beautiful for your own good.” The proceedings were followed by chance by the reporter Adela Rogers St. John, who sensed a good story and the beautiful Barbara came to her office let. The result was a two-page article about her in the LA Examiner.

Barbara La Marr is considered to be one of the first California women to make money in the film industry. However, she had already written film scripts for various studios as a successful screenwriter before her career as an actress.

She started out as a professional dancer in 1913, based on Isadora Duncan 's style. She also wrote articles that were published in her father's newspaper. Barbara performed in Chicago, New Orleans and New York and danced at the 1915 World Exhibition in San Francisco . One of her dance partners was Rudolph Valentino , with whom she remained friends throughout her life. She began writing screenplays for Hollywood around 1918 and changed her name to Barbara La Marr. Their work was received with enthusiasm. She wrote the scripts for films such as Rose of Nome , The Mother of His Children , Little Gray Mouse and My Husband's Wives , among others, and received fees of up to US $ 10,000.

Because of her beauty, Barbara La Marr caught the attention of producers and soon received offers for small roles in films, which she turned down. Mary Pickford , then superstar of the film, finally gave her advice: “My Dear, you are too beautiful to be behind a camera. Your vibrant magnetism should be shared by film audiences. ” Louis B. Mayer , head of the newly founded MGM studio , was looking for new faces and immediately signed Barbara. Her first film was Harriet and the Piper , in which she initially played a supporting role.

Her final breakthrough came in the role of Milady de Winter in The Three Musketeers (1921), which Douglas Fairbanks Sr. brokered after he had chosen her as a partner in The Nut (1921). The audience had its new star, and La Marr was now shooting one film after another. Among its supporters were colleagues like Charlie Chaplin , Gloria Swanson , Wallace Reid, and Buster Keaton . Another high point of her career was The Prisoner of Zenda (1922). For the film The Eternal City (1923) she shot on the original locations in Rome , something completely unusual at the time.

In 1924, she signed a new contract with First National that gave her more options and more money that she badly needed to fund her extravagant lifestyle and increasing addiction to narcotics. With The White Moth (1924), a film based on a book written by La Marr poem was written. She also wrote the script and played the lead role. Five more films were to follow by 1926, before Barbara La Marr's death ended her successful career. Barbara La Marr's funeral was attended by 40,000 people, and the inscription on her grave reads “With God in the Joy and Beauty of Youth.” Her last film, The Girl from Montmartre , was screened posthumously and was well received by international audiences.

Barbara La Marr was married five times. In 1913 she married the rancher Jack Lytell from Arizona in her first marriage . Lytell died of pneumonia a few months after the wedding. On June 2, 1914, La Marr entered into a new marriage with the wealthy lawyer Lawrence Converse . However, the marriage was declared invalid and annulled a few days later because Converse already had a wife and three children. He was arrested as a bigamist . It turned out that he had a blood clot in his brain. The attempt at surgery was fatal for Converse.

On October 13, 1916, Barbara La Marr married for the third time. Her husband became the dancer and actor Phil Ainsworth . But this marriage was not a lucky star either. Ainsworth was charged with check fraud and served a sentence in San Quentin Prison. Barbara filed for divorce in 1918 . In the same year she married Ben Deeley (1878-1924), one of her dance partners. Deeley was an alcoholic and addicted to gambling. The marriage was dissolved in 1921. In 1923 Barbara La Marr married for the fifth and last time the cowboy star Jack Daugherty (1895-1938). The marriage did not end until Barbara's death, but at that time it was only on paper. Daugherty committed suicide in 1938.

None of Barbara La Marr's five marriages had children. In 1923, however, she adopted a baby, a boy whom she named Marvin Carville La Marr. The reason she gave was that she had had enough of men and wanted someone who was only hers. Only her closest friends knew that the baby was actually her birth son, the fruit of one of their many affairs. To save face and to spare the child the stigma of illegitimate birth, she went to Texas for some time before the birth. She then returned on a Personal Appearance Tour and officially adopted her child from the Hope Cottage Orphanage.

While filming her thirteenth film Souls for Sale (1923), Barbara La Marr miserably injured her ankle. Since the film had to be completed, the studio doctor prescribed various means to numb the pain. Morphine and cocaine were among them, but also heroin . The actress was initially not told what "medicine" she received. When the film was over, she was addicted to heroin. Coupled with their predilection for highly alcoholic cocktails, this resulted in an extremely harmful mixture.

In the years that followed, Barbara La Marr made one film after another and had a lively social life. La Marr liked parties and did not indulge in relaxation. "I never sleep more than two hours a day. I have better things to do. ”She claimed herself. An excess of food, alcohol and other drugs led to weight gain, which she fought against with extreme hunger diets.

Her increasing health problems and drug addiction were also heard by her employers, but with La Marr still looking gorgeous, there seemed no need for action. In 1925 she went to a sanatorium for a short time, but hardly returned when work began on her next film, The Girl from Montmartre . While filming, Barbara La Marr continued to use alcohol, heroin, and cocaine to keep herself on her feet. Towards the end of the year, she collapsed on the set and was taken home. She fell into a coma. When she woke up again, she left her son in the care of her friend, the actress ZaSu Pitts , who, together with her husband Tom Gallery, adopted him after Barbara's death. Marvin got a new name - Donald Gallery. He only found out later that Barbara La Marr was his birth mother and died in October 2014 at the age of 92.

Her health was ruined. She was diagnosed with tuberculosis due to a lack of defenses and was literally waiting to die. She died on January 30, 1926 at her home in Altadena, California.