Flag of the international bear community

As Bear Community ( English for "Bear Community"), the Community of the so-called will bear signified homosexual or bisexual adult men with hairy body (especially chest , abdomen and pubic hair ) and a distinctive beard . Sometimes female butches are also represented in the scene who are proud of their body hair. In addition, there is an overlap between bears and corpulent homo- or bisexuals, the so-called chubbies , which often leads to the misconceptionBear would be defined solely in terms of increased body weight. 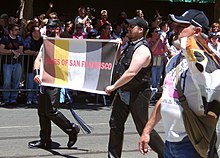 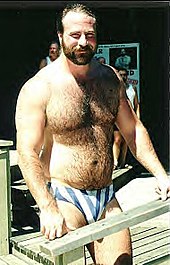 Jack Radcliffe during the Bear Bust 1999

The scene today summarized under the term Bear Community has different scene origins and did not originate in the USA. In the US, precursor found in the early 1970s in the networks of "chubby and chubby-chaser" (about: Fatty and Dick Hunter ). In Europe, especially after the so-called leather scene developed from the merger of homosexual motorcyclists into organizations in the 1970s , associations of men who preferred bearded and hairy men were formed. This is how the group "Beards meeting Beards" was born in London in the early 1980s.

Analogous to this, Michael Zgonjanin and Henning Marburger founded the group "Bartmänner Köln" in 1984, which today is one of the oldest existing bear groups in the world. What the initiators had in common was the idea of ​​creating a circle of friends for fans of hairy men that was not subject to the constraints of the leather and fetish scene - especially its sometimes strict codes such as fetish orientation and rigid club structures.

An important step in the development of the bear community was the establishment of Bear Magazine in San Francisco in 1987, which contributed to the familiarity of the name Bärenszene (Bear Community) and often leads to the assumption that the bear scene originated in the USA. BEAR magazine has also been published in German since 1996.

In Europe, the development continued with the establishment of Nederbears in Delft in 1988, Ebmc (EUROPEAN BEARS & BIG MEN'S CONVERGENCE) in Brussels in 1990, Girth & Mirth Germany (1991) in Berlin, Bartmänner Berlin (1992) and Bartmänner Frankfurt ( 1993) continued. Some of the initiatives disappeared again in the 1990s and emerged again later, mostly under the term Bear Group.