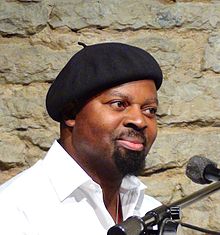 Ben Okri, OBE (born March 15, 1959 in what was then the Northern Region in what is now the Nigerian state of Niger in the city of Minna , Nigeria ), is a Nigerian writer .

When he was two years old he came to London with his parents, where his father studied law and where he finally began his schooling. In 1966 he returned to Nigeria, grew up in Ibadan , Ikenne and Lagos , eventually graduated from Urhobo College in Warri, and during this time also began to turn to writing. After graduating from school, he waited for his admission to study at a Nigerian university and worked in various professions: he worked in a company in the chemical industry, as a journalist for a magazine in Lagos and taught mathematics. When Ben Okri had still not got a place in Nigeria in 1978, he went back to London, where he still lives and works - interrupted only by short trips to his home country - and enrolled in comparative literature at Essex University . During his student days he published a novel and two plays, which he also put on stage. Because his scholarship was canceled, he had to leave the university for lack of money and was temporarily homeless . With a small loan from friends, he made a fresh start by selling literary reviews and publishing short stories . He also worked as a broadcaster for the BBC and as the poetry editor of West Africa Magazine.

After he had published a large number of his own works as a prolific writer and won the Booker Prize with The Famished Road in 1993, he said in an interview with the Guardian that he had three passions as an author: "novel, poetry and drama". In autumn 2018 he directed his own stage version of The Stranger by Albert Camus at London's Coronet Theater in Notting Hill . The substance of this book has given rise to many new points of view and a number of "Hamlet questions" in the present.

Okri is currently (2019) Vice-President of the English Center of International PEN.

Ben Okri is a Fellow of the Royal Society of Literature and received the Order of Officer of the British Empire in 2001 . In addition to the Booker Prize in 1993, he won the Commonwealth Writers Prize for Africa, the Aga Khan Prize for Fiction and the Chianti Rufino-Antico Fattore literary prize.