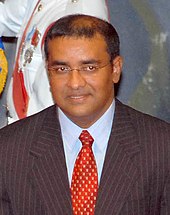 Bharrat Jagdeo trained as an economist , including in Moscow (1984–1990). His political career began in 1980 when he joined the People's Progressive Party (PPP). In 1995 he was named finance minister, and finally president in 1999. After the surprising resignation of the previous President Janet Jagan in August 1999, Jagdeo was sworn in as the new head of state. In the parliamentary elections on March 19, 2001, his party won 53.0% of the vote and 34 of the 65 seats in parliament.

In the parliamentary elections on August 28, 2006, Bharrat Jagdeo's party, the PPP / Civic coalition, received almost 54.6% of the vote. His party won 36 parliamentary seats. He and his party prevailed against the largest opposition party, the People's National Congress (PNC), the party of the Creole people. In contrast to previous years, the process of going to the ballot box was peaceful this time.

Jagdeo took the oath of office on the constitution on September 2, 2006, taking up his second term as President of Guyana.

In 2010 he received the Champions of Earth Award .