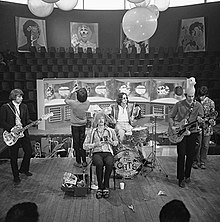 The Bonzo Dog Doo-Dah Band was a many-headed Underground - Beat tape from the north of London , with satirical lyrics and eclectic musical and visual arrangements 1967-1972 Pop Art made credit history. Between 1966 and 1970 the band recorded four studio albums and several singles . They released another album in 1972 for contractual reasons. The indie - pop band Death Cab for Cutie named after one of their songs.

The story of the "Bonzo Dog Doo-Dah Band" began at an English art school. There Rodney Slater and Vivian Stanshall formed a band in 1962 under the name The Bonzo Dog Dada Band. Bonzo was referring to a cartoon character from the 1920s, Dada to Dadaism . After countless changes of members, the first two singles were recorded at Parlophone in 1966 , which remained without significant success.

In the beginning they played anarchic versions of songs from the early decades of the 20th century. With the constantly changing line-up, the range of music also changed. Stylistic means of various musical styles were used. One constant, however, were the lyrics, which were always characterized by weird humor. In 1967 the change took place in Gerry Brons hands on the Liberty label with the first album Gorilla . Since then, the Bonzos have been regarded as the musical counterpart of the legendary Monty Pythons , with whom they appeared on the television program Do Not Adjust Your Set even before they were founded. Pieces such as Hello Mabel , Rhinocratic Oaths or Trouser Press shape the profound nonsense humor that is related to the protagonists of the New Frankfurt School ( Pardon , Titanic ).

The only financial success in the British pop charts was Paul McCartney 's I'm the Urban Spaceman, produced in 1968 by Paul McCartney under the pseudonym “Apollo C. Vermouth” . Another connection to the Beatles was through a performance by the “Bonzos “In the film Magical Mystery Tour . In one scene the band accompanies a striptease performance.

While Gorilla from 1967 was still jazz-oriented due to the influence of Slater and Spear, The Donut at Granny's Greenhouse was more rock-oriented. Tadpoles went more towards jazz again, Keynsham showed the rock side of the band again.

In 1970 the Bonzo Dog Doo-Dah band broke up. After a disastrous US tour, which was the beginning of his illness for Stanshall, they drew the line. They remained contractually bound to their record company, which they owed another album. Stanshall, Cowan and Innes recorded the album Let's Make Up and Be Friendly with guest musicians in 1972 . Spear and Smith made their own but musically insignificant contributions, Slater was only mentioned in In Spirit .

Neil Innes was initially a member of Monty Python's Flying Circus , played among other things in The Knights of the Coconut and wrote film scores. In addition to some solo albums, he released the album Rutland Weekend Television in 1976 together with Python member Eric Idle. Idle was also an important partner for the 1978 album The Rutles : All You Need Is Cash , a parody of the Beatles. He wrote most of the songs for the film of the same name and played Ron Nasty (the counterpart to John Lennon ). TV series (for example The Innes Book of Records ) followed on British television, and in 1997 another Rutles project Archeology (based on the Beatles publication Anthology ).

Vivian Stanshall had some short-lived band projects like Big Grunt, Sean Head Showband, Gargantuan Chums and Kilgaron that didn't last long because of Stanshall's unstable health. He recorded four solo albums, two music-only records and two mostly narrated works. He had his own radio series Rawlinson Ends , wrote plays and films such as Crank and Stinkfoot . He can be heard as Master of Ceremonies on Mike Oldfield's Tubular Bells . His psychological problems left him lonely in the early 1990s and led to his death in a fire in his apartment in 1995. His second wife Ki maintains a website about Vivian Stanshall's work.

Roger Ruskin Spear recorded an EP and two solo albums, another single in 1978 under the pseudonym Tatty Ollity. After problems with his hearing, he later worked as a lecturer at Chelsea Art College in London.

Rodney Slater became a social worker, he didn't appear on LP or CD until the reunification, but played live with the White's Scandals, his New Titanic Band and with Spear in Bill Poster's Will Be Band.

Legs Larry Smith disappeared after just one obscure single (from the Mel Brooks film The Producer ) and appeared in the supporting program of Elton John . In the 1980s he was seen around George Harrison , for whom he designed the cover for his album Gone Troppo .

Dennis Cowan reappeared at Stanshall's Big Grunt in 1970, after which he joined Neil Innes' band The World. He also played on the last Bonzo album Let's Make Up and Be Friendly . Cowan worked in 1973 on the London stage version of " The Rocky Horror Show " as bassist. He then switched to the band Darien Spirit, who recorded an album called Elegy to Marilyn . He died of peritonitis shortly after its publication in 1975 . Vivian Stanshall wrote the lyrics to Vacant Chair for him, and Steve Winwood wrote the music .

Dave Clague formed the band Siren with Kevin Coyne , appeared on Spears' first album, but then disappeared. He later released the first Spear album on CD on his own label DJC and put together the album Anthropolgy with unreleased Bonzo recordings. At the beginning of the new millennium he worked in the cover band Wypeout.

Bob Kerr , Sam Spoons and also Spear and Slater played from 1983 temporarily in the Bill Posters Will Be Band. Kerr and Spoons still play together in Bob Kerr's Whopee Band today .

Little or nothing is known about the whereabouts of the other musicians.

On January 28, 2006 there was a concert at the London Astoria with the original members Innes, Spear, Slater, Smith, Bohay-Nowell, Spoons, Kerr and Andy Roberts. Guest singers appeared on Ade Edmondson, Phill Jupitus, Paul Merton and Stephen Fry; the DVD of this concert was released in May. In November 2006 the band got together for a tour of England, there were twelve concerts. In the summer of 2007 a studio album was recorded in Suffolk, which was released in December 2007 under the title Pour l'amour des chiens .

Roger Ruskin Spear, Rodney Slater and Sam Spoons had fun working together again and formed the band Three Bonzos and a Piano together with pianist Dave Glasson. At several concert series in the south of England they were accompanied several times by Andy Roberts, Legs Larry Smith and / or Vernon Dudley Bowhay Nowell. In February 2010 the CD Hair of the Dog was released . In the summer of 2012, Three Bonzos and a Piano released their second album Bum Notes . Legs Larry Smith has re-released his "mini-musical" Call Me Adolf as an in-house production (available on his website).

In 2011, Neil Innes founded the Idiot Bastard Band with Ade Edmondson, Rowland Rivron and Phill Jupitus, but they only performed live. In 2016, Neil Innes moved to France to largely retire from the business.

Singles (not included on albums):

Three Bonzos and a Piano