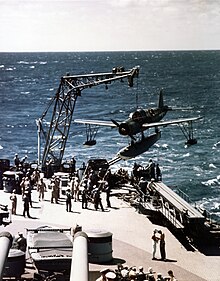 Arado Ar 196 on board the Admiral Hipper

An aircraft on board is an aircraft stationed on a merchant or warship .

The aircraft on board were seaplanes that were put on the water with a crane for take-off. If the ship had a catapult , aircraft capable of catapults were thrown directly from the ship into the air. To take an aircraft back on board, it had to go into the water and was then hoisted back on board by crane.

On-board aircraft were used in the navy for aerial reconnaissance, for the transfer of personnel and documents and for the delivery of messages that could not be radioed for reasons of secrecy. But they could also fly bomb attacks against enemy merchant ships and submarines . In civilian ships (exclusively passenger steamers) they carried mail and in civilian research ships they were used for sea reconnaissance, route determination, iceberg reconnaissance and in emergencies for patient transport.

The world's first ship with aircraft on board was the French aircraft carrier Foudre in 1912, the two years after the first flight of Henri Fabre with a seaplane from the French navy was put into service. The Foudre already had a hangar on deck in which the aircraft could be housed protected against the weather. The Foudre also had a sloping ramp on the bow for an aircraft take-off from board, which was also tested by the navies of the USA and England, but proved unsuitable due to the shortness of the ramp until the large flight decks of the aircraft carriers were able to safely wheel start Board enabled.

In the First World War , on-board aircraft were still rare. In the inter-war period, on-board flight systems came into use, which enabled departure directly from the ship. There were also some civilian aircraft on board for airmail traffic , and more rarely for rescue missions and the search for schools of fish for fishing. During the Second World War , on-board aircraft were in large numbers in practically all navies. In the 1950s, however, these disappeared as they were replaced by the much more practical helicopters .

Known aircraft on board

Civil aircraft on board