Frog pond in the Botanical Garden in Mainz in May 2006 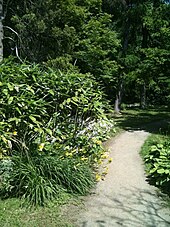 An olive tree was wrapped in leaves and coniferous branches for winter. In the background the building of the "Green School"

The paths in the botanical garden are named after famous scholars, here after Carl von Linné .

A vegetable garden was laid out within the botanical garden .

The botanical garden of the Johannes Gutenberg University in Mainz was laid out between 1946 and 1955 on a site that was previously an agricultural area with fruit trees and a military training area. Today the botanical garden in the open air and in the greenhouses is home to around 8500 plant species from almost all regions of the world. The botanist Wilhelm Troll (1897–1978) was the founder and first director of the Mainz Botanical Garden . He was assisted by Max Top (1895–1986) in laying out the garden.

Tasks of the botanical garden

As part of the University of Mainz, the Botanical Garden is used for research and teaching as well as for the preservation of biological diversity. In addition, his tasks include public relations work and further education, trainees can complete vocational training to become gardeners ( growing ornamental plants ). The garden is available to the public for occasional cultural events and recreation. There are regular or individual guided tours through the botanical garden all year round.

Since the beginning of 2010, the "Green School", a new extracurricular learning location of the Biology Department at Johannes Gutenberg University, has been available to school classes. The educational offer is aimed at all age groups and deals with topics such as the importance of biological diversity , its conservation and sustainable use.

Head of the Botanical Garden

The directors of the Botanical Garden:

The director is supported by a technical manager and a curator .

At irregular intervals there are special exhibitions on botanical topics such as " Plants in the Bible ", plant explorers or, as in the Darwinian year , on evolution in the plant world.

1997 already considerable large was Agave in succulents - Greenhouse planted, which could potentially date back to the early days of the Botanical Garden in the 1950s. Since no origin and age were documented, it was originally assumed that it was an Agave horrida , which, given the seven centimeters long, needle-shaped leaf tips, was a perfectly appropriate name. Over the years, however, the agave had grown so large that this determination became increasingly questionable. At the beginning of 2014 it had reached a diameter of more than two meters and began to form a powerful inflorescence. A new identification was now possible based on the characteristics of the inflorescence: It is the Mexican agave salmiana . Since the inflorescence grew between three and six centimeters per day in February 2014, it was expected that the roof of the greenhouse would be reached by the end of February. A corresponding hole and a possible frost protection were prepared. However, this was not necessary due to the mild weather and the agave only broke through the roof at the end of April 2014 and formed a first branch of the inflorescence there. On June 23, 2014 the first flower buds opened. It was the first bloom of a large agave species in the Mainz Botanical Garden since it was founded. With this event, the life cycle of the plant, which spanned several decades, is completed and it subsequently dies.