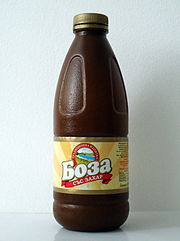 A bottle of Bulgarian boza

Boza ( Turkish : boza , Bulgarian : боза [ boˈza ], Romanian bragă ) is a slightly alcoholic , sweet and sparkling beer (originally made from millet ) that is consumed in the Balkans and Turkey , Central Asia and the Middle East .

Etymologically, it is assumed that the origins are in Tschagatai-Turkic and Persian -speaking countries (büze = Pers. For millet).

The exact determination of the origin is difficult, because alcoholic beverages based on millet have been known to the ancient oriental civilizations (Babylonians, Egyptians) since early times. In the case of the Boza, various authors often assume a Central Asian origin, which was brought to Anatolia with the nomadic tribes. The Seljuks called beer-like drinks Bekni .

In the Ottoman Empire , boza production was an important trade, and many breweries and drinking halls (so-called bozahâne ) were built. The boza was also the favorite drink of the Janissaries . In times of war, a bozacı - a boza manufacturer - always followed the troops and thus secured supplies. Under Selim III. a variant with opium was brought onto the market. Boza addicts are known from the Ottoman travel narrator Evliya Çelebi , who, according to him, “were never bitten by street dogs” because they always had to have a walking stick with them due to their unsafe walk. The Arab world traveler Ibn Battuta reported about the Turkish Boza in the 14th century when he visited Central Asia . Under Mehmed IV , all alcoholic beverages, including the low-percentage boza, were banned out of hand - albeit unsuccessfully.

With the Ottoman rule, the boza came to the Balkans, where it is known as боза or bragă , especially in Bulgaria and Romania . Before the expansion of the Bulgarian snack bars for sweets (Sladkarnitsa), where boza was poured into large drinking glasses at tap systems, the Boza street vendors were part of the streetscape of every town. Since many of these street vendors were Albanians, it is believed in Bulgaria that boza is an Albanian drink. In Radomir , Bulgaria , which was one of the centers for making boza in the 18th century, there is a memorial dedicated to boza street vendors.

Also in the Middle Eastern Ottoman provinces such as B. Egypt was consumed boza. There it is sometimes brewed with a higher percentage (up to 7%), and sometimes a similar liquorice- based drink is called Boza. The Arabic slang term Booze for alcoholic beverages is said to have originated from the Arabic word for Boza .

Famous is a boza tavern in Istanbul, Vefa Bozacısı, which is said to produce one of Istanbul's best bozas, who tasted the Ottoman palace and, last but not least, Mustafa Kemal Ataturk . In contrast to the often sour and thin version (e.g. in Bulgaria or Albania), this version of the Boza is thicker and sweeter. It is often eaten there with roasted chickpeas, which you can buy in a shop across the street.

The Turkish author Orhan Pamuk has set a monument in the novel This Strangeness in me the Boza. His protagonist Mevlut came to Istanbul from the Anatolian province in the 1960s. Here he earns a living for himself and his family by selling Boza on the street. 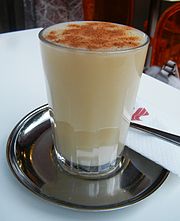 Originally it is brewed on a millet basis. However, all sorts of grains are used. Lactic acid and ethanol are produced during fermentation, and the finished product contains between 0.6 and 1% alcohol . The quality of the portions varies, as the fermentation agent is quite heterogeneous in terms of bacteria / yeast. Depending on the variant, it is also sweetened extra.

Depending on its consistency, Boza has a white-brown color and a (viscous) liquid consistency. The drink is very nutritious and is offered at a reasonable price. Older advertising posters in Bulgaria advertised Boza with well-fed toddlers with red cheeks. In the Balkans it is drunk in all seasons, especially at breakfast in connection with Baniza .

In Turkey it was a typical winter drink until the introduction of cooling technology. You can now get it there all year round in the supermarket, but due to the (low) alcohol content it does not have a Halāl certificate.