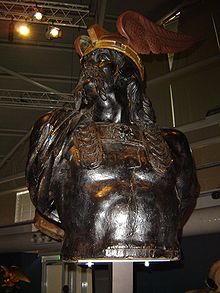 Sculpture of Brennus with a winged helmet , 18th or 19th century, found on a French ship 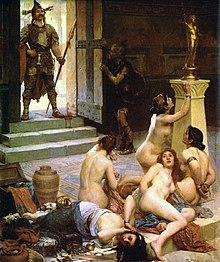 Le Brenn et sa part de butin “Brennus and his share of the spoils of war” by Paul Jamin , 1893.

Brennus ( Gallic Brennos ) was a military leader of the Celtic Senones who lived in the 4th century BC. BC advanced to Rome and plundered the city.

The Senones belonged to those Celtic tribes that had existed since the 4th century BC. Came from Gaul in northern Italy. They oppressed the Etruscans there and came in 387 BC. In conflict with the emerging Roman Republic when the Etruscan city of Clusium asked for assistance. From a Roman point of view, the most devastating encounter in its history was the battle of the Allia against the Senones and Boier and the subsequent sacking and pillage of Rome. The day of the battle of July 18 went when dies ater , as a black day in the history of Rome one, which was then barely larger than the Senonenstamm. The victorious Celts subsequently sacked the city and only the castle on the Capitol could be held by the defenders - according to legend, the cackling geese of Juno prevented a secret night attack by the Gauls on the castle.

A Venetian incursion into northern Italy and the seven-month siege of the Capitol caused the Celts to retreat, not without first negotiating a ransom of 1,000 pounds of gold with the Roman consular tribune Quintus Sulpicius Longus . According to legend, the Romans accused Brennus of using wrong weights when weighing this ransom. Then Brennus should use the words “ vae victis. "(Eng." Woe to the vanquished. ") Also threw his sword into the scales, so that they now had to pay more gold. The saying became proverbial and was later quoted by Plautus and Plutarch , for example . The material damage to the Roman state was far less than the immaterial. The self-confidence was shaken; fear of the Celts remained an important factor in Roman foreign policy for centuries. Writes Jochen Bleicken : "Never forget [the Romans] the terrible misfortune; it had worked like a shock to them, and many centuries later, when Rome was already a world empire, every Roman went into horror when a heap of Celts appeared on the distant horizon. ”As a direct result of this , Rome laid In the following centuries great importance was attached to a standing army with well-trained soldiers, which became the basis of the Roman success.

It is unclear whether Brennus actually bore this name or was given it afterwards after that Brennus who penetrated deep into Greece a century later and thus became a similar horror figure for the Roman-Greek world.