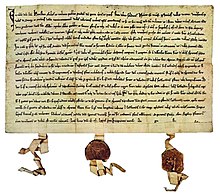 As federal letters are from the end of the 19th century alliance records in the Swiss Confederation referred. The term can stand for a single document as well as for its entirety.

Federal letters regulated various matters between the countries in what is now Switzerland. For example, there were agreements on mutual assistance or the mediation of disputes, regulating the control of allies in negotiations with third parties, and a ban on foreign judges who are not country folk or who had bought their office.

The best known today is the federal letter of 1291 , which was signed between Uri , Schwyz and Unterwalden or Nidwalden . It had long been forgotten and was only emphasized from other federal letters from that time from the 19th century. It refers to an older alliance that has not been recorded.

The oldest known and surviving federal letter is the one from 1243 in which the cities of Bern and Friborg commit themselves to mutual assistance. The first federal letter still preserved today in German is the federal letter of 1315 , in which the words "Eitgenoze" and "Eitgenossenschaft" appear repeatedly for the first time. Since then, the terms Confederation , Confederation and country people have been used in all alliances . In Latin, the term "conspirati" is used in the alliance of 1291.

All these letters of the Old Confederation, apart from the one from 1291, can also be found in the White Book of Sarnen . Most of them are reproduced in German in an official manuscript on parchment.

Exhibits of the Federal Letter Museum