Calabar in the Cross River Delta 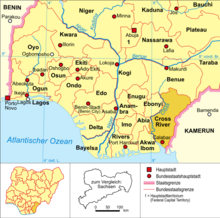 Calabar is a port city in Nigeria with 319,858 inhabitants and is the capital of the state of Cross River . It is located on the Calabar River . She has a university.

The settlements of the Efik on the Calabar River, from which the present-day city of Calabar emerged, were visited as early as the 15th century by Portuguese sailors who pushed along the west coast of Africa to find the sea route to India. Because of the favorable natural conditions - the Calabar Delta offered good anchorages - Calabar was an important trading port in transcontinental shipping as early as the 16th century. The Europeans supplied themselves with food and fresh water here.

In the 17th century, the slave trade became the main source of income for the people of Calabar. The Efik bought people from the interior of what is now Nigeria, which they exchanged for European goods. Since the late 17th century, Calabar was the largest slave trading center in Africa. It is estimated that a quarter to a third of the Africans brought to America came through Calabar. Unlike in other ports, the slave trade was controlled by the locals here. Until the middle of the 19th century, the Efik prevented the establishment of European bases on the Calabar River. Up until the middle of the 18th century, in the vicinity of today's city, three cities called Creek-Town , Old-Town and New-Town rivaled for power and supremacy in trade with the Europeans. Their kings fought several wars against each other. The kings and leading families of the three cities inherited much from their European trading partners on a cultural level. They lived in wooden houses of European design, wore European clothing and had furnishings, tools and weapons brought from Europe. Many members of the upper class knew the English language. Some even went to schools in England. The Efik remained true to their traditional religion until the middle of the 19th century.

After the ban on the slave trade, Calabar retained its importance as a port. Mainly products of the highly developed plantation economy in the region were exported. In 1846 the Scottish Presbyterians established a mission station in Calabar. In the following decades, under her influence, many Efik converted to Christianity. When the British colonial administration was established in southern Nigeria in the 1880s, Calabar was made the seat of the governor of the Niger Coast Protectorate . But the King of Efik also continued to reside in the city. As an old flourishing trading post and administrative center, Calabar was an important place for the development of modern Nigeria. For example, the country's first hospital and post office were opened here.