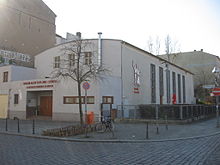 A Cemevi (pronounced dschemewi , from Turkish cem , "assembly", and ev , "house", plural cemevleri ) is an Alevi meeting and culture house. It is not a building that is solely used to hold a Cem . This is where the community or the community council meets to discuss problems, settle disputes and convey the Alevi traditions and teachings. With the spread of Alevism in Germany, the common German-language name Cemhaus developed .

In the Alevi faith, no place in the world is more sacred than the other. Since a sanctification of the place is forbidden, a Cem can be held in almost any other place (with the exception of cemeteries). A Cemevi was set up in a former synagogue in London . The building of the Cemhaus in Berlin is a former church . From the Alevis' point of view, there is nothing against holding a Cem in a synagogue that is still active. Contrary to the opinion of many Alevis, a Cem may be held in a former and still active mosque . The only prerequisite is that services of the other religious community are not disrupted and that their services do not interfere with the CEM. In the past, it was customary to hold a Cem outdoors, but the urbanization of more and more Alevis has made buildings necessary to practice worship. In a Cemevi there must also be a hall in which a Cem can be held. This room is usually decorated with carpets, and pictures of Ali or the 12 imams, Haci Bektas-i Veli and Ataturk often hang on the walls . At the end of the room there is a place for the Dede or Cem leader. There are seats along the wall for the participants of the Cem. The middle area remains empty so that the Semah can be practiced there. In Turkey , the seating consists mainly of cushions on the floor. In contrast, chairs or benches are used in Turkish metropolises and in Europe .

A Cemevi must provide the space for teaching activities. These can be separate classrooms. Since the Cemsaal does not only have to be used for the Cem, it can also be used for other community events. If a community does not have its own classrooms, lessons usually take place here. Dances, playing the saz and religion are taught. Since the Alevis in Europe often have a migration background , language courses in the respective national language are also held in the Cemevi.

The Cemevi as a courtroom for the Alevi judiciary is no longer of great importance. During the Ottoman Empire, each ethnic group carried out its jurisdiction autonomously because it did not want to submit to Islamic law. But since the secularization of Turkey, Alevis have turned to the ordinary courts and settled any disputes there. Nonetheless, less complicated disputes are sometimes settled in the Cemevi. This avoids the cost of proper court hearings. In a constitutional state, however, the Cemevi is not responsible for criminal matters. Occasionally there are weddings in Cemevi that are carried out in addition to civil marriage. In some Cemevi mediation is offered.

The structure of today's Cemevi can still be traced back to the characteristics of the Bektashi tradition or its Alevi variants in Anatolia , but the increasing urbanization of the Alevis and the spread of Alevis in Western Europe required changes. In order to meet modern demands, Cemevi developed into multifunctional buildings with a wide range of cultural activities in Western Europe and in major cities in Turkey. In addition to traditional semah , saz game and religion classes , Cemevi also offer language courses and computer courses in Europe. A Cemevi also needs rooms for social counseling of its members and in Turkey other educational offers such as tutoring and homework supervision have developed. Cemevis are not recognized as places of worship by the Turkish government.