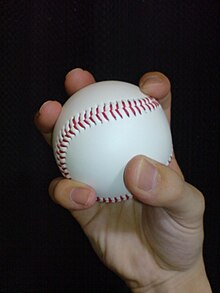 The point is that the hitter can confuse the change-up with other throws, especially the fastball , which is about 10-15  mph faster. For this, it is essential that the throwing movement looks exactly like that of the other pitches. In particular, the speed of the throwing hand ( handspeed ) must be identical for the hitter. In addition to the deception, there is often additional movement, e.g. B. downwards and laterally, which should start as late as possible. It is said that the changeup makes the fastball look faster, it disrupts the battery's timing.

The equivalent in cricket is the slower ball .

The changeup is a good throw to vary the speed. If the hitter z. B. fouls an inside fastball ( inside fastball ) against its natural stroke direction (hits out of the way), then this is an indication that the hitter was too slow. He'll try to get on the ball earlier on the next pitch. This is a situation in which you throw a change-up because you then expect him to have contact far too early on the next pitch and miss the ball and hit it only very weakly. Another situation is the so-called hitters count - i.e. three balls and no or one strike - when the pitcher is on the defensive, has to throw a strike and usually uses his best pitch.

There are several handles so that the ball flies more slowly. Most often the pitcher grabs the ball with three fingers (index, middle and ring finger) instead of two fingers, whereby some pitchers bend the index finger and form an "OK" sign with the index finger and thumb (the so-called circle changeup ) . Another possibility is to spread the middle and ring fingers apart so that they form a "V" ( Vulcan changeup or splinge ).