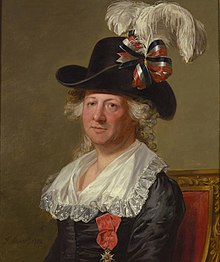 The Chevalier d'Éon became famous because he lived large parts of his life as a woman and it was only after an investigation into the dead that doubts about his actual physical gender were finally dispelled.

The son of the lawyer Louis d'Éon de Beaumont and Françoise de Chavanson successfully attended the Collège Mazarin in Paris until 1749 , where he obtained a doctorate in both rights. He was then admitted to the parliament as a lawyer and secretary of the tax authorities and royal censor . As he was witty and educated, he soon moved into influential circles, and some of his memoranda caught the attention of the Prince of Conti, who made him Louis XV. recommended. Both of them had the idea to send him to Russia as a spy (officially as the secretary of Ambassador Douglas) in 1756 as part of their secret diplomacy (“ Secret du roi ”). He was supposed to meet Elisabeth , Tsarina of Russia, without the knowledge of her Grand Chancellor Bestuscheff, who hated France, and thus promote the idle diplomatic relations between the two countries. D'Éon successfully gained the trust of the Tsarina, who with Louis XV. a correspondence began. In 1757 diplomatic relations were resumed and Russia was drawn to the side of France and Austria in the Seven Years' War .

In 1761 he returned to France. D'Éon had a lifetime reputation as an excellent fencer. He fought in the Seven Years War under Marshal de Broglie and was wounded in the head and thigh near Ultrop . At Osterwieck, his attack forced a Prussian battalion to surrender.

In 1763 he was sent to London as secretary to the Ambassador de Nivernais, Louis-Jules Mancini-Mazarini , but secretly as a diplomat with negotiating powers ( ministre plénipotentiaire ). He was involved in numerous intrigues and liked to establish his contacts in circles of the British nobility by delivering home-grown wines. George III selected him as the bearer of the ratifications for the peace treaties, and d'Éon received it from Louis XV. the Order of Saint Louis , which raised him to the rank of Chevalier . Since he was acting in London on the direct secret order of the king, who did not inaugurate his foreign minister and officially denied any connection, he came into conflict with him when the new ambassador de Guerchy was sent to London. After resisting orders to surrender his diplomatic post and leave London, he remained in London as a political exile, acquiring important government papers. In his defense, he had diplomatic correspondence about his recall published in London in 1764.

From around 1763, d'Éon lived at least temporarily in a female identity - possibly also to make extradition more difficult. In London he became a Freemason at La Loge de l'Immortalite No. 376 , a French lodge under the English constitution. In January 1769 he was promoted to master. In 1766 he received from Louis XV. an annual pension of 12,000 livres and continued espionage.

After the death of Louis XV. in 1774, d'Éon tried to return to France. The king agreed and gave him a high pension for the return of secret government papers, but made it a condition that d'Éon had to wear women's clothes. In 1777 Chevalier d'Éon returned to France as "Chevalière Charlotte d'Éon". The theater writer and agent Beaumarchais , who was sent to London, is said to have persuaded him to do this. When he was fed up with this role in 1779 and reappeared as a man, he was arrested by the king and only released when he agreed to wear women's clothes again. 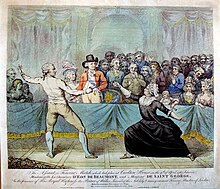 Show battle between the Chevalier de Saint Georges and d'Éon in women's clothes on April 9, 1787 in Carlton House

In 1785 he again moved to England. As a result of the French Revolution , d'Éon lost his pension, so that he was forced to earn his living by selling his valuable library and through public fencing duels in women's clothes, which he held until he was seriously wounded in 1796. But he offered to set up and lead a women's regiment in support of the French Revolution, which was refused despite Lazare Carnot's advocacy. His last years he lived with a widow named Cole. In 1779 he had a friend print memoirs. In 1805 he began to write his autobiography, but it appeared only posthumously. He received a pension from the British Queen Sophie Charlotte von Mecklenburg-Strelitz , whom he had known since his trip to Russia in 1756. He died in London in 1810 at the age of 81.

The sexologist Havelock Ellis coined in the early 20th century d'with reference to Chevalier Éon the term "Eonismus" for that time so-called " transvestite tendencies"; today one would use the term " transgender " for it.