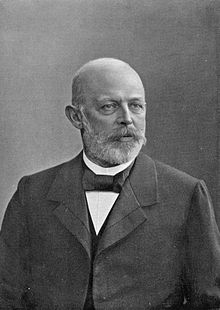 Hubbe was born as the son of the owner of the Gustav Hubbe company , Gustav Hubbe . He first attended the preparatory school and the higher industrial and commercial school in Magdeburg. He then went on to do a commercial apprenticeship at Loesener & Schoch from Easter 1858 to the end of 1860 . He was still employed there as a cashier until March 1862. Hubbe then went to the military. Following this, he continued his training by traveling abroad to Great Britain , France , Norway and Russia .

From 1864 he worked in his father's company. In 1865 he became authorized signatory alongside his brother Friedrich Hubbe . In 1871 he became a partner. Hubbe initiated the transformation of the company from a trading to an industrial operation. A plant for vegetable oil production was built on Werder in Magdeburg in 1874. After his brother died in 1878, Hubbe was the sole owner of the company. After the production facility was destroyed by a fire in 1890, Hubbe had a new, modern factory built on Berliner Chaussee in Magdeburg in 1891 . He introduced various technical innovations. His company had its own testing department, where research was carried out.

From 1881 to 1887 Hubbe was a city ​​councilor . Between 1882 and 1887 he held the office of commercial judge . From 1887 he took over the function of an unpaid city council. He was also a member of the Provincial Parliament of the Province of Saxony .

Hubbe was also committed to society. From 1871 he was a member of the Magdeburg Corporation of Merchants , of which he was a member from the end of 1878. From the spring of 1887 to the end of August 1889 he was first the second head of the corporation, then the first head of the corporation until his death. He was particularly committed to the question of transforming the corporation into a chamber of commerce , which took place in 1899. Hubbe also helped found the Association of Central German Chambers of Commerce . Another focus of Hubbe's economic and political activity was the promotion of commercial training. He supported the opening of the commercial advanced training school in 1899, which also offered theoretical lessons for the apprentices.

The parish hall of the Evangelical Trinitatis parish in Magdeburg-Brückfeld , built in 1916, was named "Ida Hubbe Foundation" after his wife Ida .

Hubbe was awarded the honorary title of Kommerzienrat in 1891 , in the second stage of this award in 1901 as a Privy Councilor of Commerce . The city of Magdeburg temporarily named a street as Hubbestrasse in his honor .