This article covers the Mayan city of Cobá. For further meanings see Coba . 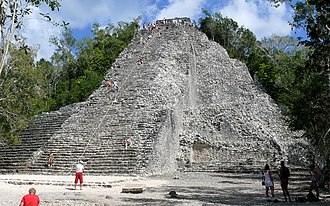 Cobá is a Maya ruin site in the Mexican state of Quintana Roo on the east side of the Yucatán peninsula , about 40 km inland from the Caribbean coast. Cobá also refers to the village of the same name, which is directly west of the Mayan ruins.

Cobá is located west of the Valladolid - Tulum trunk road , about halfway between the two cities; to Tulum it is approx. 42 km. An approx. 1 km long cul-de-sac leads from the trunk road to the village, via which the ruin area to the east can be reached.

The old ceremonial site was built during the classical Maya period (600–900 AD). In the heyday of the Maya, Cobá was one of the largest Mayan cities in the Yucatan, but for reasons as yet unknown it was deserted when the Spaniards arrived.

The city took up an area of ​​up to 70 km². However, the area indicated is not to be understood as a contiguous settlement area, since the Maya cities had an "open settlement character". Rather, it is the scatter zone of the settlement with a densely built-up center and strongly decreasing building density towards the edges.

Cobá is divided into five building groups by archaeologists. The Nohoch Mul group includes the 42 m high pyramid with 120 steps, called El Castillo . At the top of the pyramid there is a small ritual room and a stone altar, which was probably used by the Mayan priests for blood sacrifices to the gods .

Ritual room on the top of the pyramid

A special characteristic of Cobá are the more than 20  Sacbeob , bricked paths, some of which run significantly higher above the site and connect individual parts of the settlement, even further away. One of the Sacbeob leads about 100 km west to the Mayan city of Yaxuná south of Chichén Itzá .