CorelDraw Graphics Suite (own spelling: CorelDRAW Graphics Suite ) is a graphics and image processing software collection from Corel Corporation that is particularly widespread on Windows systems .

The version numbers were only incremented to 12 (2003), in the subsequent versions the "10" was replaced by the Roman numeral X, thus designated X3 (2006) to X8 (2016). The year has been used as the version number since 2017. Since version 2019 the CorelDRAW Graphics Suite is also available again for macOS.

CorelDraw is distributed as a package of applications ( Graphics Suite ) for graphics editing. The 2020 version contains the following components:

In addition, various additional “helpers” are included, such as BenVISTA PhotoZoom Pro 4 (plug-in for enlarging digital images), a barcode assistant, cliparts , fonts and other items.

The first version of the program was developed for Microsoft Windows and released in 1989 as version 1.2 (versions 1 and 1.1 were internal pre-release versions). A version for Apple Macintosh was added later, with version 11 being the last version for Macintosh systems. At times there was also an independent Unix version (CorelDraw 3), which was later replaced by a Wine- based version (CorelDraw 9) only for Linux and finally abandoned entirely.

What was special about the first CorelDraw versions was that vector fonts were supplied in a proprietary format. Windows 3.0 did not yet support TrueType fonts. In order to still be able to use Postscript fonts and to be able to upload the supplied Corel fonts in .wfn format as a printer font to the appropriate printer, the WFN Boss utility was included with these versions. Corel was thus independent of Adobe's PostScript fonts . The extensive font package, consisting of over a thousand OpenType and PostScript fonts in 2010 , has been retained to this day. At least some older versions were also available together with Ventura . Even the very early versions allowed the export of graphics in a font (initially in Corel's own format), which means that CorelDRAW can also be used as a simple font editor.

In addition, in the first versions it was only possible to work in black and white outline mode; the actual color graphics could only be seen after switching to preview mode. This was a concession to the computers that were very weak at the time. Nevertheless, rendering the preview image often took a few seconds to minutes, depending on the complexity of the image.

The newer versions increasingly include functions from desktop publishing and prepress . There is a direct PDF output, a print preview that enables complex assembly sheets, and a calibrated color preview that also shows mixed colors using the trapping method.

In version X5, the color management has been completely reprogrammed and now corresponds to the global industry standard that was largely shaped by Adobe. However, this leads to considerable color differences when editing files from previous versions.

The version-dependent vector format has the file extension CDR. Thanks to the libcdr program, LibreOffice (Draw), Inkscape , sk1 and Scribus can also open this file format; this also applies to CorelDraw Templates (CDT) and CorelDraw Presentations Exchange (CMX) files. 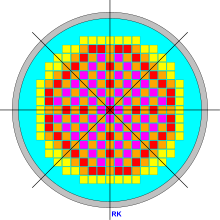 The graphic from the natural sciences shown was originally programmed in CorelDRAW 6 with COREL Script , adopted in a later version and exported in SVG format . For objects that are often repeated in a graphic, such as the squares in the figure, programming is advantageous, especially when the exact position of the objects is important. However, VBA can also be used to control the workflow in the vector graphics program CorelDRAW and in the image editing program Corel Photo-Paint.