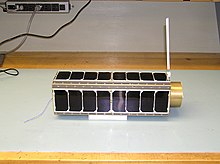 GeneSat-1 as an example of a triple plus CubeSat 3U +

CubeSat ( cube , since the basic unit is approximately cube-shaped, see below) is a standard for low-cost small satellites developed in 1999 by Stanford University and California Polytechnic State University .

The satellites must conform to a standard format. The smallest possible Cubesat (1U from English one unit for one unit ) has the dimensions 11.35 cm × 10 cm × 10 cm and a maximum weight of 1.33 kg. These satellites are carried in a special launch device (Poly Picosatellite Orbital Deployer or P-POD), which can accommodate three CubeSats, as a secondary payload during satellite launches. In addition, a launch device for individual CubeSats was developed by the Japanese Titech University.

In 2010, Cubesats were used to monitor the environment as well as to carry out biological experiments or to test new space technology. It is estimated that there were between 35 and 40 cubesats in orbit at the time, around a quarter of which were still functioning.

With the establishment of the Cubesat standard, the miniaturization of electronics and sensors made it possible to carry out not only simple tasks but also scientific experiments with such small satellites. One use case are, for example, experiments that are carried out in series, as is done in the study of biological processes. These depend on several inexpensive starting options.

Commercial applications include observation and remote sensing and are a driver of technical development. In 2014, 76 percent of the Cubesats launched were commercial.

The first application outside of Earth orbit took place in 2018, when two 6-way cubesats of the MarCO type flew parallel to the interplanetary flight of the InSight lander to Mars to support communication during the landing of InSight. With the Artemis 1 mission, eight Cubesat space probes are to be brought to the moon in 2021 , one of which will also land on the moon.

Since 2011, NASA has carried out several experiments to accelerate the crash of Cubesats after the end of the mission ( deorbiting ). Some manufacturers offer passive devices for deorbiting. Systems similar to a braking parachute can be considered, for example , but also a system with a 30-meter-long conductor that generates an electromagnetic force. As of 2019, the development of such a system is still just beginning.