The German Language Atlas (DSA) is a language atlas of the dialects in the area of ​​the former German Empire . The DSA was founded by Georg Wenker (1852–1911). With over 40,000 survey locations (and other locations from the follow-up surveys in German-speaking areas outside the German Reich), it represents the most comprehensive overall survey of the dialects of a language worldwide. The material was made available on the Internet under the project name Digitaler Wenker Atlas (DiWA) ; today it can be viewed at Regionalssprache.de (REDE) .

The DSA used the indirect survey methodology. The survey was carried out by sending a questionnaire to teachers in each school location with sentences to be translated into the local dialect. The sentences were put together in such a way that typical phonetic and selected grammatical properties of the dialects concerned had to emerge in the translation. For example, if the word apple was given in the questionnaire , it was to be expected that in areas where the plosive / p / was not shifted to the affricate / pf / in terms of linguistic history, the students would write a form with / p /. In the sum of such dialect features, it should be possible to distinguish individual language landscapes from one another. 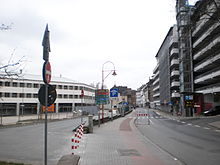 When the surveys in the German Reich were completed in 1887, a total of 44,251 questionnaires from 40,736 school locations were available. Separate follow-up surveys were carried out for the German-speaking areas outside the German Reich: in 1888 in Luxembourg (325 sheets), from 1926 to 1933 in the Sudetenland (2,854 sheets), in Austria (3,628 sheets), in Liechtenstein (24 sheets), in Burgenland (28 Bogen), in Gottscheer Land (35 sheets), in Switzerland (1,785 sheets), in Poland beyond the old border (396 sheets), in South Tyrol (485 sheets), in the seven and thirteen communities of the Cimbrian dialects in northern Italy (each 1 sheet) and in North and East Friesland (67 sheets). In addition, 2,050 foreign-language forms were received (e.g. Yiddish with its specifically Jewish forms of German). A total of 51,480 questionnaires were collected from 49,363 locations with a German-speaking population. Meanwhile, Wenkerbogen are available from other German-speaking islands abroad (e.g. Russia).

The entire material is archived in the research institute Deutscher Sprachatlas at the University of Marburg .

Importance of the DSA

The dialectological research at the University of Marburg had a great influence on German dialectology. Based on the language atlas materials, the basic features of the dialectal structure of the German-speaking area as well as essential results of the history of sounds and forms in German were worked out. In addition, the methodology in data collection using questionnaires and data evaluation in maps brought decisive progress. The advantage of the method lies in the extremely high density of records, as almost every school location in the former German Reich and numerous school locations outside the Reich were recorded.

The criticism of the methodology crystallizes mainly in the indirect survey. The dialects had to be written using the normal alphabet, which leaves no room for linguistic subtleties. Many dialect phenomena (e.g. vowel duration, accentuation, weakening of consonants ) are largely beyond the reach of the language atlas . In addition, the questionnaires were filled out by teachers who had not been linguistically trained, and they could also decide for themselves whether they were competent enough in the local dialect or whether they should include other informants. Thus, the problem of lay scripting arises as well as the lack of informant verification.

The specifics of the DSA emerge not least in comparison to the almost synchronously collected Atlas linguistique de la France by Jules Gilliéron (1854–1926), which represents a methodological alternative in several respects. Gilliéron preferred direct data collection. Only one person, the phonetically trained explorer Edmond Edmont (1849–1926), conducted the entire survey from 1897 to 1901. This enabled precise phonetic transcription, but the local network had to be much more extensive than that of Wenker (639 locations instead of 40,000). The further methodological development, not only internationally, but also in Germany, followed the French method, according to which the data was mostly collected in direct interviews with linguists.

The Wenker data has actually been rediscovered recently. The Marburg linguist Alfred Lameli evaluated the Wenker data in terms of area typology and was able to make clear the distance and proximity of the various High, Middle and Low German dialects by using a differentiated arsenal of quantitative methods . Jürg Fleischer , who also works in Marburg, is currently evaluating the syntactic and morphosyntactic aspects of Wenker's sentences in a project supported by an opus magnum grant from the Volkswagen Foundation ; Wenker and his co-workers and successors only exhausted these in terms of phonetic, morphological and lexical considerations. The project thus enables a first complete overview of syntactic phenomena in the dialects of the entire German-speaking area.

The Digital Wenker Atlas (DiWA) is the goal of a project in which all maps of the DSA are filmed, digitized and geocoded . This preserves the data that has been developed, because the DSA is at risk because it only exists in two originals and the 22 colors used in the card sets are beginning to fade. The maps, which for technical and financial reasons were never fully published, are made available to a broader public via the Internet. The integration of sound recordings of the Wenker sentences is intended to create an interactive multimedia world of experience .

Through the geocoding, the digital Wenker atlas forms a geographic information system (GIS) that offers innovative analysis options. The language cards can be associated with material encoded in the same way, including cultural-historical and demographic information. The historical material of the Wenker maps can be overlaid with maps from surveys for modern regional atlases, whereby the dialect development can be examined from a temporal and spatial perspective. The DiWA project, which started in 2001, is based at the Research Institute for the German Language - Deutscher Sprachatlas in Marburg and is financed by the German Research Foundation. The 576 cards were already available online in 2003, for which 1 terabyte of data is kept.

Final version of the Wenker sentences (1880):

Switzerland: For the survey of Switzerland, the South German sheet was supplemented by the lemma potato .

Head of the DSA project

(From 1973 a board of directors took over the management, between 1983 and 1989 two institutes operated under the umbrella of the DSA)