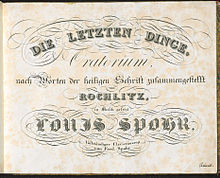 Title page of the piano reduction

The Last Things (WoO 61) is an oratorio by Louis Spohr . The composition was written between 1825 and 1826. The libretto is by Friedrich Rochlitz , whom he met in Leipzig in 1804 and contains only texts from the Bible, especially from the Revelation of John . The very successful premiere was in the Lutheran Church in Kassel on Good Friday March 24, 1826. The performance at the Music Festival in Düsseldorf in 1826 was so overwhelming that the festival was extended by one day to allow a second performance. The English singer and music journalist Edward Taylor (1784-1863) wrote a successful English version, which was performed on September 24, 1830 for the first time.

With his first oratorio The Last Judgment from 1812, Spohr did not reach the audience and he was later so dissatisfied with his piece that he did not want to perform any of its parts himself. His second oratorio The Last Things , on the other hand, is one of the composer's most famous works and is considered the most important of his four oratorios. It was played widely in the first half of the 19th century and was highly praised in its day and was also successful in England. At the beginning of the 21st century, despite its high musical quality in terms of instrumentation and expressive chromatics, it is hardly known. To mark the 150th anniversary of the composer's death in 2009, new editions of sheet music have appeared on the market and the oratorio is being performed more frequently again.

The Last Things has a duration of about 80 to 90 minutes and is designed for an amateur choir in conjunction with trained soloists and a professional orchestra. Spohr stands musically "... in a line between Handel, Haydn and Mendelssohn".

Facsimile of a fragment by Louis Spohr

The autograph score from Spohr's hand no longer exists. Only a few short fragments of the work remain from Spohr's hand, which he left behind in guest books as a kind of musical calling card. There are some copies that were copied under Spohr's supervision.

Further copies have been found, but most of them are lost today.

The differences between the various prints and manuscripts in the music are marginal; the differences relate, for example, to the slurs or dynamic markings, which are sometimes missing in some copies. In 2009, Carus published a text-critical sheet music edition in German and English based on the most important sources.

The overture introduces the entire work and the first part, the sinfonia the second part symphonically. The symphonic parts already contain a number of motifs which later recur as leitmotifs in the individual parts. Certain text passages also appear several times and bring about an intensive interlocking of the various parts. The soloists sometimes act as lead singers or alternately with the choir, so that soloists and choir appear together several times and form a unit. Particularly striking in the second part are some choral movements that begin in a great unison and then fan out into several voices ( if you seek me with all your heart , Babylon is pleased and the final chorus Your works are great and wonderful ). Spohr largely refrains from dramatizing the final judgment, placing great emphasis on prayer and the festive character of the music. In contrast to his first work, the work does not contain any large solo arias in order to maintain the unity of the work. The solo parts also dispense with difficult coloratura or virtuoso parts.

The original score is conceived as a complete work, the headings and numbering have been added by the editors of the prints for a better overview and therefore differ in the various editions. According to the Carus edition, the parts are numbered and labeled as follows:

The metronome indications in the printed editions follow the original indications by Spohr, but many pieces appeared in earlier times to be notated too slowly, contrary to performance and listening habits. Taylor assumed a full movement of two beats back and forth in the metronome markings and therefore halved the note value. This gave him twice the speed. This, in turn, is already felt by the audience at that time to be far too fast. Some English editions therefore give suggestions in the foreword for less strongly changed, but faster than the original tempi.