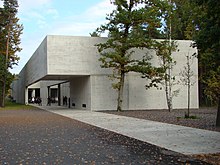 The Bergen-Belsen Concentration Camp Documentation Center shows what is happening in Bergen-Belsen, Wietzendorf and Oerbke in a permanent exhibition. From the beginnings of a barracks settlement for construction workers, to the prisoner-of-war camps and the later Bergen-Belsen concentration camp , to the liberation of the camp by the British. The establishment of the DP Camp Belsen for Displaced Persons (DP) on the adjacent barracks area in Belsen is also documented. Part of the documentation center is also dedicated to post-war justice.

Until the mid-1960s, there was very limited information about the camp here. A permanent exhibition was opened in 1990, although it was still very limited due to the lack of sources. The new Bergen-Belsen documentation center was opened on October 28, 2007 . In particular, archives from the former Soviet area and sources from the property of former prisoners and contemporary witnesses enabled more comprehensive documentation. The building is located on the road between Bergen , Belsen and Winsen / Aller , on the southern edge of the former area of ​​the Nazi concentration camp.

The 18-meter-wide, partly two-storey, almost 200-meter-long concrete building was planned by the Brunswick architects Engel and Zimmermann (KSP office). It has an exhibition area of ​​1,500 m². The Federal Republic of Germany and the State of Lower Saxony each contributed half of the costs of 13 million euros . For the construction of this memorial, the architecture office and the Lower Saxony Memorials Foundation received the Lower Saxony State Prize for Architecture 2008. However, there is also criticism of the concept and the specific design of the work of the documentation center, some of which have found expression in the press.

The historian Jens-Christian Wagner has been head of the memorial since 2014 and will take over the management of the Buchenwald and Mittelbau-Dora Memorials Foundation in October 2020 . Elke Gryglewski is to follow him as director of the memorial.

The historian and author Thomas Rahe has been the scientific and deputy director of the Bergen-Belsen concentration camp memorial since 1987. From 2001 to 2007, Henry Friedlander was the chairman of an international commission made up of eleven experts who volunteered to advise on the new conception of the Bergen-Belsen concentration camp documentation center .

Lower Saxony youth associations have been working on the site of the memorial and the Soviet war cemetery since 1993. For them, actively dealing with the history of National Socialism is an important part of their work. Every year, 25 to 30 youth associations take place in Bergen-Belsen. It was possible to uncover, research, document, measure and secure structural remains of the former camp. In the past, warehouse parts were also redesigned through such work camps.

The permanent exhibition shows documents and photos from the camps Bergen-Belsen Stalag XI C (311) , Wietzendorf Stalag XD (310) and Oerbke Stalag XI D (321) . In addition, in short video scenes, reports from survivors of the Bergen-Belsen concentration camp and from former prisoners of war in the camps. They report on their childhood and youth, their family and hometown and life during and after deportation or captivity. The life dates and photos of people who did not survive the camp are also shown. Furthermore, eyewitness reports from residents of the villages neighboring the camps can be seen. Floor showcases are embedded in the floor of the Dokuzentrum building. Here are various items of daily use that were found in the barracks or on the camp grounds.

After the liberation of the Bergen-Belsen concentration camp, the British Army Film and Photographic Unit (AFPU) recorded 33 rolls of cine film and over 200 photos, some of which can be seen in the exhibition.

Chronology of the Bergen-Belsen camp

The exhibition shows in a large area, with various plans, drawings and descriptions, the chronological structure of the individual parts of the camp, the prisoner of war camp and the later Bergen-Belsen concentration camp.

In 1936 there was a settlement of over 40 buildings, mostly wooden barracks , north of a road that led from Belsen to Meißendorf . In the eastern part these were arranged in rows. In the western part, in a pine forest, there were several scattered barracks (the so-called "forest camp"). Around 3,000 German construction workers were housed here. They were employed in Belsen to build the Wehrmacht barracks for the Bergen military training area, which is currently under construction. A shooting range for the military training area had already been set up about 700 meters further south.

From 1940, 600 French and Belgian prisoners were housed in the barracks.

“ The Mourners ” by Mykola Muchin in the docu building, it was previously in the prisoner of war cemetery

As of May 1941, the entire area was cleared and prepared to accommodate around 20,000 Soviet prisoners of war. In addition, Serbian prisoners extended the area to the south to about 55 hectares. They erected watchtowers and drew a barbed wire fence around the site. The camp was given the designation Stalag XIC (311) . In the east of the site, near the country road (today L 298) from Bergen to Winsen , the main entrance with the administrative barracks was laid out. A hospital with around 770 beds was built in the “forest camp”. The main camp for prisoners of war was set up in the southern part of the site. In August 1941, 8,000 Soviet prisoners of war had already arrived in Bergen-Belsen. On November 1, 1941, the number had grown to 13,878. But there were only five makeshift accommodation barracks. About 600 meters west of the site, separated by the Meiße , a prisoner of war cemetery was set up, where the first dead prisoners of war were buried in individual graves.

By the summer of 1942, a few more wooden barracks had been built in the main camp. The hospital had been expanded to 1,200 beds. Between July 1941 and March 1942 around 18,000 Soviet prisoners of war perished from starvation and epidemics. They were buried in the prisoner-of-war cemetery, now in mass graves. The barracks themselves were now mostly empty, as the prisoners of war were either on duty or were in the constantly full hospital.

In April 1943, the SS set up the part south of the road from Belsen to Meißendorf as the "Bergen-Belsen camp of the Waffen-SS". Jews who were to be exchanged for Germans interned abroad were to be accommodated here. Around 520 concentration camp prisoners prepared the camp to accommodate 10,000 Jews. The expansion of the barracks went very slowly and remained in a provisional state. In July 1943 the first “ exchange Jews ” came from the ghettos in Poland , Greece and the Dutch transit camp Westerbork . The individual groups were housed in separate areas. The areas were separated from each other by barbed wire fences .

In the spring of 1943 the camp for prisoners of war Stalag XIC (311) was closed. The hospital continued to operate as a branch camp of the Fallingbostel POW camp ( Stalag XI B ). Prisoners of war from the entire military district XI were treated here. The northern part, the prisoner-of-war camp, was separated by a four-meter-wide route with barbed wire fences and privacy mats on both sides from the southern part of the site, the concentration camp. The former road from Belsen to Meißendorf was now the camp dividing strip.

In the autumn of 1944 the exchange camp with around 6,400 Jews was located on the site of the concentration camp. This was divided into four individual camps, the "star camp" , the prisoners had to wear their civilian clothes with the " Jewish star ", the "neutral camp" for Jews who had the citizenship of neutral countries, the "special camp" for Jews from Poland and the "Hungarian camp" for Hungarian Jews whose ransom was negotiated with foreign Jewish organizations. At that time there was also the “women's camp” in the far south . Around 2,100 civilians from the Warsaw Uprising and prisoners from the Auschwitz-Birkenau concentration camp were housed here in tents . The “men's camp” also existed in the far east of the concentration camp . Around 3,000 sick prisoners from other concentration camps who were classified as incapable of work were usually held here. In the barracks of the prisoner-of-war hospital there were around 800 Italian military internees in addition to Soviet prisoners of war . In addition to this area, about 1000 men and women of the Polish Home Army who had been captured during the Warsaw Uprising were imprisoned. In January 1945 the Wehrmacht handed over the hospital area to the SS. At the beginning of April 1945, it also took over the Wehrmacht barracks about one kilometer to the east . Towards the end of the Second World War , many concentration camp prisoners came to Bergen-Belsen from other concentration camps and extermination camps near the front. At least 85,000 men, women and children were brought here in more than 100 transports and so-called “death marches” . This attempted to cover up the crimes from the approaching Allied troops and to prevent the prisoners from being released.

Burning down the barracks 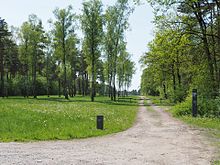 On April 15, 1945, the concentration camp was handed over to the British armed forces without a fight . The barracks of the concentration camp were torn down by the British in April / May 1945 and set on fire to prevent the further spread of epidemics. The remaining warehouse fences, watchtowers and the crematorium were demolished in the winter of 1945/46 by German authorities.

Most of the survivors of the concentration camp returned to their homeland in the summer of 1945. However, mainly Poles and Jews of different nationalities remained behind. They were civilians who were initially without a known place of residence due to the turmoil of World War II, the so-called Displaced Persons (DP). Up to 10,000 people lived in the Polish DP camp in Bergen-Belsen . It was disbanded in the summer of 1946. Up to 12,000 people lived in the Jewish DP camp in Bergen-Belsen. The camp was largely closed after the emigration of most of the Jewish displaced persons in the summer of 1950; the last DPs left it in August 1951.

The historic camp has been largely destroyed by the park-like landscaping. The archive and the exhibition in the documentation center are therefore of particular importance.

Overview of the documentation center

This area is divided into:

A “stone path” leads through the documentation center into the geographical center of the former warehouse area. The location of the building and the routing trace the route of a country road that was cut when the camp was built in 1941.

Among other things, the following is shown in chronological order:

This is broken down into:

In detail is shown here:

( on the upper floor of the documentation center )

Transport wagon - part of the loading ramp in the background 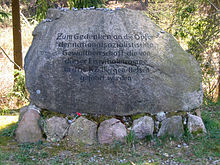 Aside from the new documentation center, it becomes clear on the loading ramp which way the prisoners had to cover in the camp. On the road (L 298) from Bergen to Belsen , about halfway there, a road bridge leads over the railway line that runs from Celle via Bergen to Belsen. Immediately behind this bridge on the left, in the parking lot, is a memorial. This was created by the Hanoverian artist couple Almut and Hans-Jürgen Breuste and inaugurated here on January 26, 2008. It is intended to commemorate the nearby railway ramp on which the prisoners of war and concentration camp inmates arrived. They were transported here by the Reichsbahn and had to walk 5 to 6 km to the camp from here. From the parking lot, a narrow inconspicuous (but signposted) approx. 550 m long footpath leads along the railway line to the loading ramp. The AG Bergen-Belsen has set up a "boxcar" there. At their request, part of the ramp and track was placed under monument protection in 2000. The loading ramp will continue to be used (as of 2019) to unload and load tracked vehicles of the exercising troops.