The title of this article is ambiguous. Further meanings are listed under nozzle (disambiguation) . 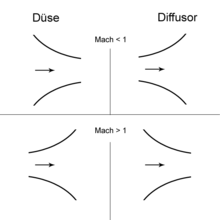 Difference in cross-section between supersonic and subsonic

A nozzle is a technical device for influencing a fluid when a pipe flow passes into the free space; it forms the end of the pipe. The nozzle can have the same cross-sectional area over its entire length , widen, taper or have other complex shapes. The nozzle does not do any work , but converts between speed and static pressure.

Can through a nozzle

Spinnerets are usually round or square plates made of glass, metal or ceramic with several openings of the same size. Sometimes they are also in the form of cylinders or cones . You should divide the spinning mass into equal spinning melt or spinning solution jets.

A confuser (see nozzle flow ) is the counterpart of a diffuser . In a confuser, the speed of the fluid (liquid or gaseous) increases, in contrast to the diffuser, in which the fluid flowing through is slowed down. The geometry of the confuser and diffuser depends on the Mach number of the flowing fluid. While at subsonic speed a tapering cross-section acts as a cone and an expanding cross-section as a diffuser, the relationship is reversed at supersonic speed.

A complex application example for a nozzle is the jet engine in a jet aircraft . The air is only allowed to flow around the inner components in the subsonic range , as otherwise the flow of the blades of the rotors and stators would be stalled . The combustion chamber would not have enough oxygen are supplied in this case and turn the drive. To prevent this, a diffuser is installed in front of the engine for supersonic flight . Before the air flow exits, it must be accelerated back to supersonic speed. This is done with the help of the nozzle.

In a nozzle, not only the cross-section and the flow velocity, but also the density or the kinetic pressure of the flow medium represent a characteristic number . These characteristic numbers are proportionally dependent values. This means that the cross-sectional area of ​​the nozzle in the supersonic range has to increase instead of decrease in order to achieve a higher flow velocity.

The mathematical relationship can be explained with the help of the Rankine-Hugoniot equation (area-velocity relationship):

Nozzle of a rocket engine

The nozzle of the rocket engine visible in the picture is flowed through "from top to bottom" and represents an example of a hypersonic and thus divergent nozzle.