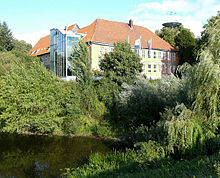 Exterior view of the Elbe Castle Bleckede with moat

The castle, which is surrounded by a moat, was built on the remains of a castle first mentioned in 1287. It served to control the nearby Elbe and secured a customs post on the river. The oldest part of the palace complex is the round tower from around 1500, of which only the tower stump remains today. The north wing of the castle was built by Duke Ernst II of Braunschweig-Lüneburg in 1600 in a half-timbered style. The west wing, in which there are exhibition rooms today, was built around 1743 in the Baroque style . From the 16th century the complex was the seat of the bailiff of Bleckede. The local writer Auguste von der Betten was born here in 1827. From 1885 to 1932 the Elbe Castle was the administrative seat of the Bleckede district . Today weddings take place in the former courtroom.

Since a comprehensive renovation in 2000, the information center for the Lower Saxony Elbe Valley Biosphere Reserve ( Biosphaerium Elbe Valley ) and the local tourist information center have their headquarters in the castle with an elf fish aquarium. In 2002, the historic tower stump was converted into a lookout tower with a metal construction , which enables a good view of the Elbe valley. Various environmental education programs for kindergartens, schools and people with disabilities take place in the environmental workshop. The biosphere with its around 20 species of fish and a beaver enclosure is a member of the German Animal Park Society .

For three decades, the “Musical Spring” festival took place in the courtyard. In 2008 the Elbschloss Festival - Midsummer in Bleckede started at the same festival location . A castle festival is organized in August with medieval market stalls and in April there is a craft market in the north wing.

Some outdoor shots for the film Grün ist die Heide were shot in September 1951 in the courtyard of Bleckede Castle.