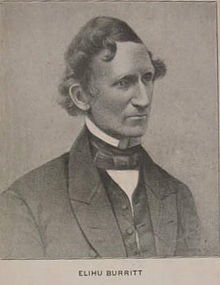 Elihu Burritt was the tenth child of a shoemaker and farmer. He had only received ordinary school lessons and had to help out with the household early because of the long illness and eventual death of his father when he was apprenticed to a blacksmith at the age of 16. When his apprenticeship was over, he took lessons from his older brother Elijah, a school teacher. But he then returned to his craft, which provided him with a sufficient livelihood in Worcester (Massachusetts) , where he moved in 1837, and at the same time gave him enough leisure to satisfy his thirst for knowledge in the library of the Antiquarian Society there.

As a writer, Burritt first appeared in 1839 with the magazine The Literary Geminae , then in 1842 with adaptations of the Icelandic sagas. In addition to the older and newer classical languages, his language studies also included the Semitic, Portuguese, Flemish, Danish, Swedish, Icelandic and the various Celtic and Slavic languages .

But his great reputation owed the learned blacksmith ( the learned blacksmith ) less his literary achievements as his efforts to producing a general world peace. He also worked for the abolition of slavery . As a 20-year-old, driven by deep, almost enthusiastic religiosity, he had already formed a family circle to which he presented his views, based on the Bible . Since 1840 he has toured much of the United States, preaching peace and war, which contradicts the principles of the gospel , as the chief obstacle to the prosperous development of the welfare of the nations. His weekly newspaper The Christian Citizen, which he founded in Worcester in 1842, and his later magazines The Peace Advocate and The Bond of Brotherhood also campaigned intensively for world peace.

In June 1846 Burritt went to England, published the small pamphlet Sparks from the anvil ( sparks from the anvil ) here in 1848 and then took part in the peace congresses mainly inspired by him in Brussels (September 1848), Paris (1849), Frankfurt (1850 ), London (1851), Manchester (1852) and Edinburgh (1853) eager share. His translated into many languages olive leaves ( olive leaves , in 1853, a kind of leaflets within the meaning of the friends of peace) were distributed in millions of copies all over Europe to Russia.

On his return to America, Burritt published Thoughts and things at home and abroad (New York 1854, London 1868), in which he put down the observations made on his travels. But soon he went back to the British Isles. Despite the little success of his effectiveness, he continued his peace sermons in England and Scotland.

Burritt's Yearbook of the Nations was published in 1856. He described his wanderings through England and Scotland in A Walk from London to John O'Groat’s (London 1864) and A walk from London to the land's end and back (London 1865). From 1865 to 1870 he was the United States Consul in Birmingham . He then returned to America and died on March 6, 1879, at the age of 78 in New Britain, Connecticut.