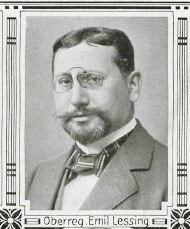 On March 16, 1895, Emil Lessing became Otto Brahm's second director . In 1896 he directed Hauptmanns Florian Geyer (premiere 4th January) and Schnitzlers Freiwild (premiere 3rd November) at the Deutsches Theater . Hauptmann's Roter Hahn , premiered on November 27, 1901 - with Max Reinhardt as the shoemaker Fielitz - as a continuation of the beaver fur , was unsuccessful. On October 22, 1904, Emil Lessing performed Florian Geyer in the Lessing Theater with greater success than in 1896. Also in 1904, shortly before - on September 24th - he brought the tragic comedy Traumulus by Arno Holz and Oskar Jerschke onto the stage of the Lessing Theater.

From 1914 to 1915 Emil Lessing was director of the Berliner Volksbühne .