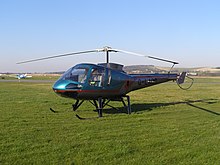 An Enstrom 480 at Shoreham Airport, UK

In 1959, the lumberjack and mechanic Rudolph "Rudy" J. Enstrom (1916–2007) founded RJ Enstrom Corp. in Menominee , Michigan . He was supported by experienced aircraft designers and local business people. In the 1960s, Enstrom began building and selling the F-28 light helicopter. In 1965 the F-28 was voted "Michigan Product of the Year".

In 1970, US criminal defense attorney Francis Lee Bailey bought the company and in 1971 it was renamed Enstrom Helicopter Corp. renamed. A new sales and marketing concept was also introduced under Bailey, so that production reached a peak in 1979 with 109 machines. The Enstrom 280C received FAA approval in 1975 ; that same year, Fortune magazine named the guy as one of the 25 best designs of the year.

After Bailey had not been able to raise further capital for future projects, he left the company in 1979. In the following years the company changed hands several times (e.g. Victor Kiam , Dean Kamen ). The current CEO is Jerry M. Mullins.

The types 280FX and F28F produced by Enstrom are the only helicopters that use a Lycoming O-360 piston engine with turbocharger as an aircraft engine . The US trade association Aerospace Industries Association (AIA) shows an average of twenty-produced helicopters per year for the past few years.

In January 2013, the company was bought by Chongqing Helicopter Investment Co., Ltd from Chongqing , China.