A candle arch with a smoker, nutcracker and Olbernhauer rider on a base

Between two walls: Apparently “floating” variant of a candle arch with nutcracker and smokers in Seiffen

Schwibbogen in the window of an Erzgebirge house 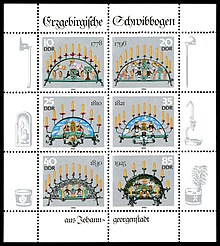 Erzgebirge Schwibbögen (miniature sheet of the Deutsche Post of the GDR)

A candle arch is a candle arch from the Ore Mountains , which is mainly used for Christmas decorations . Here, candle arches are an integral part of the Erzgebirge folk art .

The name is derived from its shape, that of a floating or buttress arch , which can be found in a similar form in architecture. The only thing the Ore Mountains have in common with the Schwibbogen in architecture is that an arch is used as a design element and that "floating" is not to be taken literally. Candle arches as products of folk art are geometrically the connection of a circular arc with a horizontally running secant . In the body (more rarely on it) there are scenic representations that are illuminated by candles. The work of art is usually placed on pedestals. Outer flying arches can also "float" between two walls (like their models in architecture; in fact, flying arches are not mobiles , but in the latter case are firmly connected to the objects to the right and left of them).

Symbolic meaning and intention to display

Contrary to the often expressed claim that the shape of the Erzgebirge candle arch symbolizes the mouth hole of a tunnel , originally Christian motifs, then the sun, moon and stars, were originally depicted in the semicircle of the first known candle arches. Probably with the oldest candle arches the "heavenly arch" should be symbolized with the use of an arch. Until well into the 20th century, candle arches were mostly made of metal. Today wood is the most widespread material, and representations that only have to do with religion in a very broad sense are increasing.

The lights placed on the arch were an expression of the miners' longing for daylight, which they often did not see for weeks, especially in the winter months; When work started in the early morning it was still dark, and by the end of the shift in the evening the sun had already set.

The motifs in the arch reflect the everyday life of the miners and their families. One of the most famous motifs shows, in addition to various smaller symbols, two miners wearing a coat of arms with the Saxon course swords , a carver and a lace maker and thus embodies three of the main sources of income for the rural population of the Ore Mountains in the 18th and 19th centuries. Other variants show Christian motifs from the Christmas story or the forest and its animals. Another well-known motif is the church of the Erzgebirge village of Seiffen , which is known for its folk art . The depiction of the fall of man and the expulsion of Adam and Eve from the Garden of Eden, which can be found throughout the oldest surviving candle arches from the 18th century, is no longer in use. 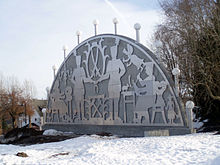 Primarily during Advent and Christmas , the now predominantly electrically illuminated arches have been placed in the windows of many houses since the middle of the last century, also far outside the Ore Mountains region, and are also used as large arches outdoors. The currently largest free-standing candle arch in the world with a width of 25 m was erected in Johanngeorgenstadt in 2012 .

Another symbolism was associated with the illuminated candle arch in the window: the light from the candle arch should show the miners the safe way back to the home.

The oldest known Schwibbogen, dated to the year 1740, was built in Johanngeorgenstadt and is made of metal. It was not until 2003 that the year was discovered under a younger layer of paint. Until then, it was assumed that the bow with the inscription "1778" and "JC Teller" was in its original painting. Other early candle arches date from 1796 and around 1810.

One of the most well-known motifs was created in 1937 as part of the “Feierobnd exhibition” initiated by the Schwarzenberg factory owner Friedrich Emil Krauss . This had launched a competition in which a Schwibbogen was to be designed for the city. The design submitted by the Leipzig illustrator Paula Jordan came closest to the claim of combining the elements of earlier motifs in a Schwibbogen and won the competition. Based on their template, the master blacksmiths Max Adler and Curt Teller built and erected a seven by four meter candle arch for the exhibition, which is now located in Johanngeorgenstadt. Krauss had the motif protected as a trademark in 1937. The Schwarzenberg Schwibbogen is still one of the best-known and most widespread designs.

Since the 1990s, deviations from the traditional, semicircular shape have emerged. The triangular design is called Lichterspitze and often shows forest scenes, forest houses, Christmas cribs, Nicholas or sacred buildings such as the Dresden Frauenkirche. As a novelty since 2010 there are Gothic arches . This shape provides the arch with a pronounced, central point in the style of a Gothic church window and is adorned with the usual winter and Christmas motifs.