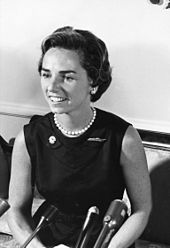 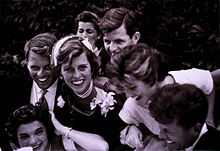 Ethel Kennedy is the daughter of Anne Brannek and George Skakel . In 1945 she met her future sisters-in-law Virginia Bennett and Jean Ann Kennedy-Smith , whose roommate she became, at Manhattan High School . Invited by her on a skiing holiday in Canada , she met her future husband, Robert F. Kennedy, who initially fell in love with her sister Patricia . However, this relationship did not last, and as a result, Ethel Skakel and Robert Kennedy became a couple. The two married in 1950. She later supported her husband and her brother-in-law John F. Kennedy in their election campaigns.

Similar to the Kennedy family , the Skakels also experienced tragedies: On October 3, 1955, their parents died in a plane crash from a lack of fuel. Her brother George also had an airplane accident in 1966 and his widow died shortly afterwards. The couple left behind children whom Ethel Skakel-Kennedy took care of.

Her nephew Michael Skakel was convicted of murder in 2003.

Eleven children were born from his marriage to Robert Kennedy. The youngest daughter Rory was born after the death of her father.

In 2014, Ethel Kennedy was awarded the Presidential Medal of Freedom . In June 2018, at the age of 90, she took part in a hunger strike against the Trump administration's policy of separating children of illegal immigrants from their parents .