The FSV Glückauf Brieske-Senftenberg , according to the association register Brieske / Senftenberg , is a football club from Senftenberg in the German state of Brandenburg .

On January 19, 1919, the association FV Grube Marga was founded, which in 1924 was called SV Sturm Grube Marga. It was named after the Marga open- cast lignite mine of the same name . The club maintained two men's, two youth and two student soccer teams. The first men's team played for two seasons from 1941 to 1943 in the Gauliga Berlin-Brandenburg , the top German division at the time, and reached places 6 and 10 (last place).

After the dissolution of the association, initiated by the Soviet occupying power in 1945, the sports community (SG) Grube Marga was created in 1946 from the “Sport and Culture Cartel Brieske-Grube Marga”. It was renamed in 1949 after the economic fundamentals were changed to so-called sponsoring companies in the company sports community (BSG) " Franz Mehring " Marga and from 1950 BSG activist Brieske-Ost. In 1948 SG Marga made it to the finals of the Brandenburg championship and one year later became Brandenburg runner-up as BSG "Franz Mehring". Thus, the team had qualified for the first season of 1949/50 of the newly founded GDR Oberliga , the top division of the GDR, and was sixth in the table that season. On November 4, 1953, the newly built "Glück-Auf-Stadion" was opened with a friendly against Torpedo Moscow . 35,000 spectators experienced a 0: 5 defeat for the miners. The most famous player of this time was Horst Franke , who played an A international match for the GDR team in 1953/54. In October 1954 the soccer section was delegated to the newly founded SC activist Brieske-Senftenberg . 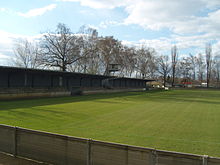 After the political change in 1989 made it possible to found civil associations again, members of the previous BSG founded the FSV Glückauf Brieske-Senftenberg on July 20, 1990. In 1991 the club was grouped into the third-class soccer league Northeast . After five seasons, the first team was relegated to the Brandenburg Association in 1996. After six years in the state league, the team managed to return to Brandenburg's top division in 2009, the year of the club's 90th anniversary, the Brandenburg League , from which they were relegated after two years. Most recently, in the 2018/19 season, Brieske was one of the strongest teams in the seventh-class Brandenburg Süd state league, but had no chance in the fight for promotion.