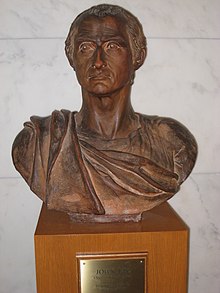 Bust of John Jays in the US Supreme Court

The Federalist article no. 5 is the fourth of John Jay , one of the founding fathers of the United States , written essay in a series of 85 essays 1787-88 in the newspapers "Independent Journal" , "New-York Packet" and " Daily Advertiser ” and published collectively under the name Federalist Papers .

Article No. 5 appeared on November 10, 1787 under the title "Continuation of the topic: About the dangers of foreign violence and influences" ( The Same Subject Continued: Concerning Dangers from Foreign Force and Influence ) in the Independent Journal under the pseudonym " Publius ".

The 1777 adopted Confederation ( Articles of Confederation ) of the United States had proved a few years after its ratification in 1781 as insufficient to ensure an efficient government of the State Union. In 1787 the Philadelphia Convention was convened to revise the articles, but as a result drafted a new constitution . In September 1787 the draft was passed on to constitutional conventions in the individual states for ratification. From September 1787 the opponents of the federation ("anti-federalists") agitated in newspaper articles against the ratification of the draft constitution. On the Republican side, these were countered by the essays by Alexander Hamilton , James Madison and John Jay.

Jay continues his reflections on previous Federalist Articles 3 and 4 on choosing between a national union and a looser alliance of states.

Initially, he refers to the history of the Kingdom of Great Britain , which has been united under the rule of Queen Anne since May 1, 1707 . He quotes from a letter the monarch wrote to the Scottish Parliament on June 1, 1706, in which she summarized the benefits of the union:

“In the previous article it has already been said that weakness and division in our own country would provoke external threats and only unity, strength and a good internal system of government can better protect us from them. This topic is a broad field and can hardly be dealt with exhaustively. "

Jay continues the example of Great Britain and points out that the three kingdoms of Ireland , England and Scotland were divided for a very long time ("for ages") and were almost continuously in conflict and war with one another. Even if it was contrary to their own interests in their relations with other countries on the European continent, they would not have given up their mutual envy and would have hindered each other far more than they helped. Jay foresees a similar discord in the event that the North American states split into three or four confederations:

“Instead of“ existing in friendship and free from fear of differing interests ”, envy and jealousy would very soon destroy trust and affection, and the special interests of each confederation would become the sole purpose of its policies and pursuits instead of the common interests of all of America . "

In the event that multiple confederations emerge, Jay anticipates that the strength of the individual federations would not stay the same for long and that an alliance would prevail. Superior politics and good administration of an alliance would soon give it the upper hand and so destroy the balance of power. One cannot assume that over the years all federations will be governed equally wisely and with foresight. If one of the alliances achieved such superiority over its neighbors, this would provoke the envy and fear of its neighbors and lead to a loss of confidence in the neighboring countries in the dominant federation, if not even to similar resentment towards them.

Since the north is generally the strongest region, it is to be expected that it will assume a predominant role in the relationship between the alliances in the foreseeable future, and that this strength will also be exploited politically. History teaches that in comparable situations the only commonality of different alliances is the common border. Instead of love and trust, discord, envy, and mutual harm would prevail. Hence those would be mistaken. who believed that different federations would form offensive or defensive alliances. On the contrary, they are different nations. Each of them did their own trade with foreign states and concluded their own trade agreements. Since they had different raw materials and products, the trade contracts would also be different. Different trade interests create different interests and therefore different political relationships with other nations. It could well be that interests would make it necessary to instigate war with the southern alliance while maintaining peaceful relations with the north. It would therefore not be easy to form or maintain an alliance that would be so contrary to one's immediate interests.

It is far more likely that in America, as in Europe, neighboring nations driven by conflicting interests and hostile passions would often take a stand against one another. Due to the geographical distance to Europe, the danger would even emanate far more from the neighboring alliances themselves, so that the North American alliances sought to protect themselves from one another by alliances with foreign states rather than against the influence of foreign nations through alliances among themselves.

"Let us not forget how much easier it is to receive foreign fleets in our ports and armies in our country than to induce or force them to withdraw."

How many conquests would not the Romans and others have made under the pretext of an alliance, and how profoundly would they not intervene in the governments of the countries they purported to protect? Now wise people should be able to decide for themselves whether the partitioning of America would be able to protect the countries against hostility and inappropriate interference by foreign nations.

Angela and Willi Paul Adams: Hamilton / Madison / Jay: The Federalist Articles: Political Theory and Constitutional Commentary by the American Founding Fathers. With the English and German text of the US Constitution . Schöningh, Paderborn 2004, ISBN 978-3-8252-1788-4 , pp. 20-24 .

Federalist Article No. 5 as an audio book (English)