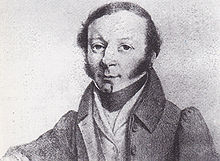 Émile Zola as a child with his parents in 1845

Zola first embarked on a military career in the army of the Kingdom of Italy under the command of Viceroy Eugène de Beauharnais . In October 1810, at the age of 15, he entered the Royal Military School of Padua , left it in April 1812 as a lieutenant in the 4th light infantry regiment and in July 1812, at only 17 years old, became a first lieutenant in the royal Italian artillery regiment.

After the fall of Napoleon , Zola served in a regiment of the Austrian army of the Kingdom of Lombardy-Veneto from 1815 to 1821 . The army enabled him to study at the University of Padua from 1817 to 1818 , where he received a degree in engineering and a doctorate in mathematics. He wrote a "treatise on leveling " ( Trattato di livellazione topografica ), which earned him membership in the Académie of Padua and a medal from the King of Holland.

Politically liberal, Carbonaro and Freemason , he left the army in 1821 and took up a position as land surveyor for the land registry in Upper Austria. From there he moved around 1825 to the kk privileged Erste Eisenbahn-Gesellschaft , which built the Budweis – Linz horse-drawn railway, the first long-distance railway line on the European continent. He left there in 1829 and acquired the privilege to build the extension from Linz to Gmunden, which he traced in the two following years. On the occasion of founding his own company, he changed the spelling of his name from Zolla to Zola .

The Zola dam in Aix-en-Provence

Since Zola could not find any sponsors, he could not start building the planned railway line, which led to the expiry of his privilege. In 1830 he left Austria and went briefly to Holland, then to Great Britain. He then went to France, where he changed his first name from Francesco to François, and entered the foreign legion with the rank of lieutenant . In October 1832 he went to Algeria, resigned after a fraud affair and embarked on January 24, 1833 for Marseille , where he established himself as an engineer for public works.

In 1843 the family moved to Aix-en-Provence . He planned numerous major projects, of which only the Zola dam with the first arch dam in Europe and the "Zola Canal", which still supplies the city of Aix-en-Provence with water, were realized.

His early death at the age of 50 left his young wife Émilie Aubert penniless. Bad speculation and embezzlement by his business partners had meant that when Zola's death, his debts exceeded his fortune by twenty times.

His grave is in the Saint-Pierre cemetery in Aix-en-Provence .