from Wikipedia, the free encyclopedia
This is the sighted version , flagged on March 12, 2019 . There is 1 pending change that has yet to be viewed.

With frequency spreading ( English spread spectrum ) is referred to in the communications technology , a method in which a narrow-band signal into a signal having a larger bandwidth is converted as needed for information transmission. The transmission energy, which was previously concentrated in a smaller frequency range , is distributed over a larger frequency range.

The term frequency spreading has acquired another new meaning (which has nothing to do with the transmission method mentioned above) in digital technology . The aim here is to reduce the spectral density of the clock signals in order to prevent radio interference or malfunctions in neighboring electrical devices. In this way, compliance with standards of electromagnetic compatibility for interference signals is achieved at discrete frequencies, but on the other hand, the interfering energy is "smeared" over an entire frequency range.

Advantages and disadvantages of the information transfer method

Frequency spreading is used on the one hand to transmit messages . Examples are military communications technology, but also in the civil sector for data transmission via wireless LAN or wireless USB . The second generation ( GSM ) and the third generation of UMTS mobile radio also use the frequency spreading contained in CDMA .

Another area of ​​application is interference minimization. So -called Spread Spectrum Clocking (SSC) is used to reduce electromagnetic interference in clock signals in digital circuits . With a group of class D amplifiers , the spread spectrum class D amplifiers, the frequency spreading makes it possible to manage without complex filtering of the switching frequency after the amplifier stage.

In the case of the Direct Sequence Spread Spectrum (DSSS) method, the user data are linked in direct sequence by exclusive-or ( XOR ) with a spreading code and then modulated onto a carrier . Without knowledge of the spreading code, it is not possible to recover the useful information on the recipient side. The spreading code has the function of a crypto key if it is cleverly chosen .

The direct sequence spread spectrum method is generally used in combination with the CDMA technique. It is used, among other things, in wireless LANs according to the IEEE 802.11 standard and UMTS , as well as in RC model making for remote control systems in the 2.4 GHz band (DSM, DSM2 spectrum).

When Frequency Hopping Spread Spectrum (FHSS, German frequency hopping ), the distributed information to be transmitted sequentially on multiple channels; Only one frequency channel is used at a time. Although each channel has a smaller bandwidth, this results in a larger bandwidth for the overall signal. The receiver must jump to the same channels synchronously with the transmitter. If the jump sequence is cleverly chosen, it appears pseudo-random and has the function of a crypto key. The patent for this process was granted to Hedy Lamarr and George Antheil in 1942 ; it should be used to control torpedoes .

This process was used, among other things, for Bluetooth and also in RC model making for remote control systems in the 2.4 GHz band (Sanwa FHSS, Futaba FASST)

Chirp Spread Spectrum or “chirp frequency spreading” uses so-called chirp pulses (= chirping) for frequency spreading . This special modulation method is used, among other things, for wireless data transmission over short distances within the framework of the Wireless Personal Area Network according to the IEEE 802.15.4a standard .

The adaptive frequency hopping method, which z. B. since Bluetooth 1.2 has been used there, offers better protection against interference by (temporarily) avoiding frequency channels that are already used or disrupted in the hopping sequence.

The time-hopping method assumes the existence of time slots . The time position of the transmitted carrier signal, which is mostly modulated with DSSS, jumps pseudo-randomly within the time slots. The disadvantage of this technique is the difficult synchronization . 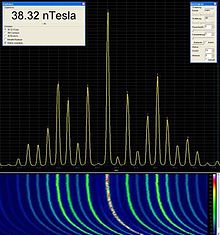 In order to avoid disruptive, high peaks of a pure clock signal in digital technology , the clock frequency is slightly varied over a small range ( spread spectrum clocking ). This avoids a single, very high interference signal. Rather, a large number of comparatively weak interference signals are now generated. Compliance with electromagnetic compatibility (EMC) standards can thus be ensured. However, the advantage of adaptive frequency hoping decreases in the presence of such interferers.