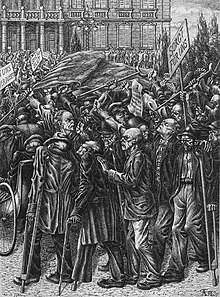 The rediscovery of graphic work

Wolfgang Kermer , art historian and former rector of the Stuttgart Art Academy , acquired Fritz Arnold's long-lost graphic cycles a few years ago and donated them to the Städtische Galerie Neunkirchen in June 2010 . In the exhibition associated with the donation, Arnold’s works were exhibited again for the first time since the 1930s. Four picture cycles with 46 original pen drawings were presented, which were created in the last years of the artist's life and are considered to be his main works: The trilogy "The war as I saw it" (1917/18), "The Beast" (1918/19 ), “Der Erlöser” (1919/20) and illustrations for a series of ballads “Four Centuries ago” (1918) by Heinrich Schulde. In a haunting imagery that Arnold puts in close proximity to the great Expressionists, the sheets of the cycle trilogy thematize the horrors of the First World War and the revolutionary events of 1918/19. Fritz Arnold was one of the first, if not the first, artists to address these issues in such detail. All of the work was done as a "sideline" job, so to speak, because Arnold was a mechanical engineer at the Saarbergwerke in Saarbrücken and, although it had been his strongest wish, had never received an artistic training. Contemporary critics considered him to be the Saar's strongest graphic talent .

Only the series “The War as I saw it” was exhibited during Arnold's lifetime: In 1919 the renowned J. Littauer art salon at Munich's Odeonsplatz showed the entire cycle and suggested the reproduction of several sheets for “ Simplicissimus ”. There was also no exhibition of the other two cycles, although this was intended by Jakob Littauer, due to the illness and the imminent death of Fritz Arnold.

With the Kermer donation, numerous bio / bibliographically relevant documents as well as a portrait of a woman made in pastel chalk from the artist's estate were transferred to the Städtische Galerie Neunkirchen. Several works that were in the possession of Arnold heirs for a long time and of which photographic recordings are available are now considered lost.

"Saar Art 2013" showed a selection of drawings from the graphic cycles that are donated by Wolfgang Kermer to the Städtische Galerie Neunkirchen and are exhibited there in a special cabinet.

The grave of Fritz Arnold and his family is one of the few grave sites preserved in the former Scheib main cemetery in Neunkirchen and has been tended as an honorary grave by the city of Neunkirchen since 2007 on the initiative of Wolfgang Kermer.