The garden chafer ( Phyllopertha horticola ) is a beetle from the family of scarab beetles (Scarabaeidae). It is often misleadingly called "June beetle". However, above all the ribbed curl beetle ( Amphimallon solstitiale ), but also other representatives of the genera Amphimallon and Rhizotrogus (such as Rhizotrogus marginipes ) are so named.

Garden beetles grow to be 8.5 to 11 millimeters long. The elytra are colored light brown, while the rest of the body has a metallic black-green sheen. The antennae are very short and end in a fan made of three lamellas. The body is densely hairy. The head and thorax are finely granulated. Six vertical stripes of dots can be seen on each wing cover.

The beetles are common in Europe and Asia. In the north their distribution extends to central Fennoscandia and includes the British Isles, in southern Europe it occurs in the mountains. They can be found in meadows and fields, in gardens, hedges and on the edges of forests, from lowlands to mountainous areas. The species is widespread and common in Central Europe .

Way of life and development

The diurnal animals usually fly around in search of food. They feed on oak , hazel and birch leaves as well as cherry and rose blossoms . Rarely does it come to a mass appearance of the beetle to significant damage. The larvae or grubs live in the soil and feed on plant roots. Since they are very small, even with numerous occurrences, there is no major damage. In April of the following year they migrate to the deeper soil layers to pupate there and hatch as an imago in May . 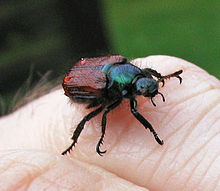