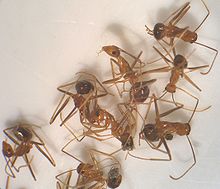 The yellow spinner ant ( Anoplolepis gracilipes , English Yellow Crazy Ant ) is a species of ant that was accidentally introduced in northern Australia (first in 1978 in the tropical rainforest of the Atherton Tablelands ), on Christmas Island in the Indian Ocean and in other tropical habitats worldwide. As a neozoon, the species is causing considerable damage to existing ecosystems by reducing native biodiversity and posing a threat to resident endangered species. For this reason, the ant is ranked among the most harmful invasive neobiota in the world in the Global Invasive Species Database . The original homeland of the animals is unknown, it is assumed that it is in West Africa, India or China.

Effects as a neozoon on Christmas Island

Especially on Christmas Island the ants pose a threat to the native flora and fauna. Here they have changed their behavior so that they no longer form single colonies with single queens, but so-called super colonies with several cooperating queens. The animals are very aggressive and with the help of formic acid they are also able to overwhelm larger animals. They attack correspondingly small reptiles as well as palm thieves and are responsible for the death of 10 to 20 million Christmas Island crabs . The absence of these animals allows seedlings to flourish, which they normally keep under control, shifting the flora of the forests in favor of these plants.

Another phenomenon that can be observed in this species of ants is their own breeding of scale insects , which in turn supply the ants with nutrients through the production of so-called honeydew , and which in turn are transported by the ants into new plant populations. This symbiotic relationship creates an imbalance in the ecosystem, especially when the secreted honeydew is not harvested by the ants, but falls on the underlying parts of the plant and settles there as a sticky, opaque mass. This mass prevents photosynthesis in the affected plant and thus causes further forest damage, especially on Christmas Island.

The white-bellied frigate bird ( Fregata andrewsi ) and the gray-footed booby ( Papasula abbottii ) are also threatened by this species. Scientists fear that populations will decrease by about 80 percent as the ants kill the young of these birds.

For a long time there were no effective antidotes for the ants. Even with high-dose insecticides , no significant successes could be achieved. In a 2009 experiment conducted with low-dose Fipronil - baits , however, the population density of a super colony was reduced by 99%. The Australian government has 4 million AUD provided for research into further defensive measures, the studies are, among others, at the La Trobe University and Monash University carried out.

As a neozoon on Sulawesi

If the Sulawesi toad finds the yellow spinner ant while searching for food, it mainly feeds on it. This is remarkable because the yellow crazy ant in the late 1970s as neozoon to Sulawesi reached. Due to their feeding behavior, the toads have a positive influence on the population of the native ant species and thus, indirectly, on the control of diseases under the cocoa trees .

The English name Crazy Ants is derived from the locomotion of animals. These move forward very quickly and constantly go in new directions - especially when they are disturbed.