Engelmann was the son of the doctor and botanist George Engelmann in St. Louis and Dorothea Horstmann (1804–1879). He studied medicine at George Washington University , where he earned his BA in 1867 and his MA in 1870. During the period of the American Civil War , he kept an accurate war diary, and his records, as far as he could judge, were objective, although he sympathized with the southern states . From 1867 he continued at the universities of Tübingen , Vienna and Paris and finally received his doctorate in 1871 at the University of Berlin .

In 1873 he returned to his hometown of St. Louis and settled there as a general practitioner. His first marriage was to his cousin Emily Engelmann († March 28, 1890). After the death of his wife, he moved to Boston, Massachusetts, in 1895, where he married a second time.

Engelmann researched the birth practices of indigenous peoples . His collection of essays and drawings on this subject from 1882 is still relevant today, with Engelmann advocating the upright position at birth as opposed to lying down as being safer for mother and child. 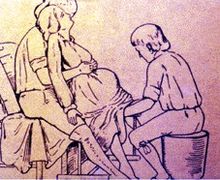 One of the sketches by Georg Julius Engelmann from 1882