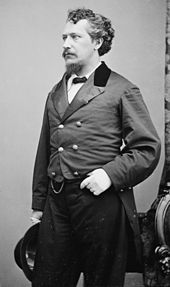 George Francis Train (born March 24, 1829 in Boston , Massachusetts , † January 5, 1904 in New York ) was an American businessman, writer, author and eccentric traveler and suffragette . His trip around the world in July 1870 was the model for Jules Verne's novel Around the World in 80 Days .

George Francis Train was born in 1829 to Oliver Train. Train lost both parents to a yellow fever epidemic in New Orleans at the age of four and was raised by his grandparents in Boston according to strict Methodist principles.

At a young age Train worked as a merchant in Chicago and from 1853 in Australia . In 1860 he went to England, where he founded horse-drawn tramways in Birkenhead and London , but they were unsuccessful because of the rails protruding above the road surface. During the American Civil War , Train lectured in Great Britain and Ireland on behalf of the Northern States. In 1862 he returned to the USA and was involved in the founding of the Union Pacific Railroad and the American Crédit Mobilier . In 1864 he settled back in England. Train remained commercially successful, including as a shipowner, and became a well-known author, but was increasingly seen as eccentric. He wrote a total of eleven books, ran unsuccessfully in the US presidential election in 1872 and claimed that Australian revolutionaries had offered him the presidency of an Australian republic to be founded. Also in 1872 he defended Victoria Woodhull when she got into trouble because of publications about the adultery affair between Reverend Henry Ward Beecher and Elisabeth Tilton and was therefore even briefly imprisoned under the law against obscenity.

In 1870 he undertook his first highly regarded trip around the world, which inspired Jules Verne. Train remained active as a railroad founder, for example with the Atlantic and Great Western Railroad in Pennsylvania, for whose financing he won the Spanish Queen as an investor. In connection with his involvement with Union Pacific, he was also highly successful as a real estate speculator.

Train was extremely happy to travel. His companion was usually George Pickering Bemis, his cousin and private secretary, later mayor of Omaha, Nebraska.

Train was angry about "his" name and character change in Jules Verne's novel. His defiant last words were therefore supposedly: "I am Phileas Fogg !"