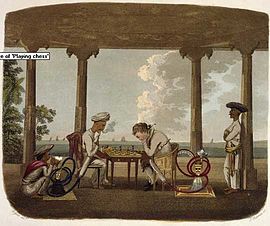 Chess scene in British India (around 1800)

In the British colonial days of India, European chess met the Indian form of the game. Ghulam Kassim was the first recorded player in India to be considered a master in western chess.

Almost nothing is known about the life of Ghulam Kassim, who lived in the city of Madras . He died in 1844.

The Indian master took part in a leading position in a correspondence competition between the chess clubs of the cities of Madras and Hyderabad . The games were played in 1828 and 1829 and both were won by Madras. They are among the earliest correspondence chess games and are also the oldest recorded games from India.

At the side of Ghulam Kassim, who led the games for Madras, quarreled James Cochrane (around 1770-1830), an employee of the Madras Civil Service . The latter has often been confused with the British master John Cochrane , who happened to be in India at the same time.

Ghulam Kassim and James Cochrane published a 63-page book in 1829 under the title "Analysis of the Muzio Gambit, and Match of two Games at Chess, played between Madras and Hyderabad". This volume comprised the annotated distant games and some opening variations , but above all it contained a detailed analysis of the Muzio Gambit . This publication is widely regarded as the first opening monograph in chess literature . The name of Ghulam Kassim is mentioned in the first place as the author.

As a result of the published analyzes, a variant of the King's Gambit was named after Ghulam Kassim .