from Wikipedia, the free encyclopedia
This is the spotted version , flagged on September 25, 2019 . There is 1 pending change that has yet to be viewed. 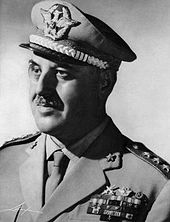 Giovanni De Lorenzo as Chief of Staff of the Italian Army (ca.1965)

Giovanni De Lorenzo (born November 29, 1907 in Vizzini , † April 26, 1973 ibid) was an officer in the Italian army . As a general , he headed the Secret Service Servizio Informazioni Forze Armate (SIFAR) from 1955 to 1962 , later he headed the Carabinieri troops as a general and finally became chief of staff of the Italian army. For the last years of his life he was a member of parliament for the extreme right.

De Lorenzo came from Sicily and was the son of an artillery officer. He studied shipbuilding in Genoa , pursued the same career as his father and served as a lieutenant colonel in the Italian Expeditionary Corps in Russia during World War II . After Mussolini's fall in September 1943, he joined the partisans and worked for the Servizio Informazioni Militare (SIM), which was now on the side of the Comitato di Liberazione Nazionale and thus the Allies .

De Lorenzo was founded in 1955 thanks to the recommendation of the former US - Ambassador in Italy , Clare Boothe Luce , head of SIFAR. Under De Lorenzo, SIFAR took part in the US project “ Demagnetize ”, which was supposed to prevent “by all means” a communist takeover in Italy and France . By order of De Lorenzo, SIFAR started dossiers (fascicoli) in 1959 for a total of 157,000 people, most of them innocent citizens and politicians. He himself collected details about the private lives of moderate politicians such as the Chairman of the Social Democrats and later President Giuseppe Saragat . These dossiers were a. used as a means of pressure and blackmail .

Even after his replacement as SIFAR boss and his appointment as general commander of the Carabinieri in 1962, De Lorenzo retained significant influence on military intelligence because all important positions there were also occupied by Carabinieri, i.e. still under his control. Under his leadership, the Defense Ministry's paramilitary police were modernized and upgraded. Among other things, they received American M47 battle tanks and M113 armored personnel carriers . In the words of the former resistance fighter and short-term Prime Minister Ferruccio Parri (PSI), De Lorenzo created "his own small private army, which was superior to the rest of the armed forces in terms of discipline and efficiency." De Lorenzo wanted to react to the terror bombing of the South Tyrolean Liberation Committee with brutal countermeasures . According to the notes of Carabinieri General Giorgio Manes, he agreed with Colonel Francesco Marasco that for every Italian killed, five South Tyroleans should be shot.

During the protracted coalition negotiations between Democrazia Cristiana (DC) under Aldo Moro and the Partito Socialista Italiano (PSI) in July 1964, President Antonio Segni , who belonged to the right wing of the DC and opposed a center-left government, called De Lorenzo to his home who then worked out a coup plan (piano solo) . According to this, the Carabinieri should occupy government buildings, centers of public life, telephone and telegraph centers, editorial offices and radio stations as well as party offices alone (Italian solo , i.e. without the rest of the armed forces or the normal police) in the event of uprisings. They should arrest anyone alleged to be a threat to public safety. The concrete lists of names, who were meant by this, were never published, but it can be assumed that they were communists, socialists and trade unionists. Whether this should really only be implemented defensively - i.e. as a reaction to outbreaking uprisings - or preventively , to prevent the strengthening of left forces, and whether Segni and De Lorenzo were serious about the coup plan at all or only with rumors that such a plan existed, Wanted to influence the formation of the government could never be clarified. In any case, PSI then quickly entered the government and renounced some of its demands.

In late 1965, De Lorenzo was promoted to Chief of the General Staff of the Italian Army . After the existence of the secret SIFAR dossier became public, he was retired in April 1967.

De Lorenzo's putsch plans were published by the left-wing magazine L'Espresso in May 1967 - shortly after the colonel's regime had taken power in a very similar way in Greece (“Prometheus Plan”) , which sparked the so-called “De Lorenzo Affair”. In March 1969, a parliamentary commission of inquiry was set up to investigate the events. The majority of its members came to the conclusion that De Lorenzo's plan was purely defensive and that a successful implementation was not likely. Even the leader of the Socialists, Pietro Nenni , doubted the seriousness of the coup plan. Nevertheless, the “De Lorenzo Affair” led to a loss of trust among the population in politicians and security organs.

In 1968 De Lorenzo was elected to parliament for the monarchist Partito Democratico Italiano di Unità Monarchica (PDIUM). In 1972, this merged with the neo-fascist Movimento Sociale Italiano (MSI). In the same year Lorenzo was elected for another legislative term, but died a year later.