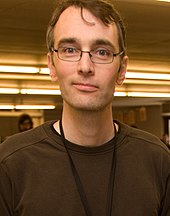 Graham Annable (born June 1, 1970 in Sault Ste. Marie , Ontario , Canada ) is a Canadian comic book writer and animator . He currently lives in Portland , Oregon . His best-known works are the comic Grickle and the anthology Hickee , both published by Alternative Comics . Annable is also active in television, film, and video games.

Annable grew up in Sault Ste. Marie, Ontario, Canada. He attended Sheridan College in Oakville , Ontario, where he trained as an animator. After graduating from school, he worked for the video game company LucasArts and was the animator at full throttle and chief animator on the later Sam & Max Hit the Road successor Sam & Max: Freelance Police . He worked as a comic book writer and illustrator for Chuck Jones , Nickelodeon and Walt Disney Productions . He worked for a year as creative director for Telltale Games , to which he is still associated today and for which he realized the game Nelson Tethers: Puzzle Agent and was involved as an animator on a number of titles.

He then moved to Portland, where he worked as a screenwriter on Coraline (2009) and co-directed The Boxtrolls . For this he received a nomination for the best animated film at the 2015 Academy Awards .