from Wikipedia, the free encyclopedia
This is the spotted version , flagged on May 20, 2020 . There is 1 pending change that has yet to be viewed. 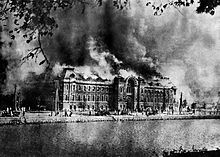 The Great Kantō earthquake ( Japanese 関 東 大 震災 , Kantō daishinsai ) was an earthquake in Japan on September 1, 1923 at 11:58 in the Kantō plain on the main island of Honshū . It killed 105,385 people. The resulting city fire resulted in an estimated total of 142,800 deaths.

Fires and burned areas in the city ​​of Tokyo

The large fires that often followed an earthquake raged particularly violently here for several reasons: At the time of the quake, lunch was being prepared in most households on wood and gas fires, the very dense development with traditional wooden houses encouraged the fire to spread and because of a strong wind approaching typhoon fueled the fires.

Arguably the worst tragedy occurred on the grounds of a military depot in Honjo borough , where over 30,000 people who had sought refuge from the fire were trapped and killed by a firestorm . Since the earthquake also destroyed the main water pipes, it took almost two days to put out the fires. Well over half of all residential buildings fell victim to the fire. The destruction left about 1.9 million people homeless, and the total damage was estimated at the then almost unimaginable sum of over a billion US dollars.

What was shocking was that not only traditional Japanese wooden houses, but also many of the new, western-style houses were destroyed. The brick buildings were somewhat fire-resistant, but couldn't withstand the earthquakes. Only a few modern buildings made of reinforced concrete were able to withstand the disaster, which is why this material should also become the dominant building material in Japan.

After the quake, the Ministry of the Interior declared a state of emergency and ordered the police to maintain public order. The order issued a warning against arson and looting by Korean immigrants. Such rumors quickly spread among the frightened population and resulted in numerous serious attacks against Koreans and those Japanese (e.g. Okinawa residents ) who were mistaken for their accent because of their accent.

In some cases, the police and the military tolerated or even supported the excesses. In other cases, officers in police stations protected Koreans from angry crowds, and a senior police officer was reported to have publicly drank water from a well that was allegedly poisoned by Koreans.

According to an investigation by the Interior Ministry, 293 people were killed in the riot, including 231 Koreans, 3 Chinese and 59 Japanese. However, estimates assume up to 6,600 victims. There were later 362 charges of murder, attempted murder, manslaughter or assault, none of which were directed against members of the police or the army and most of them resulted in only minor sentences.

In an imperial edict of September 12, 1923, it says: “Tokyo should remain the capital as before; therefore it should be rebuilt and it is important not only to restore the old, but to create a new order that enables development in the future. "

After the edict of the emperor, there was a comprehensive reconstruction program with a volume of approximately 1.5 billion yen. The most important measures were a debt moratorium , which initially suspended debts from the Kanto level, and the issue of earthquake bonds worth 430 million yen for reconstruction.

The reconstruction dragged on until the early 1930s. The reconstruction measures included wider roads and new bridges, parks and better and, above all, fireproof infrastructure for hospitals, schools and other public facilities (e.g. the Tsukiji fish market ). Attempts were made by reallocations of land to prevent winding wooden house quarters with narrow streets from forming again, but this was only partially achieved.

To commemorate this earthquake, September 1st was declared Disaster Preparedness Day in Japan in 1960 to remind people of the need for preventive measures. Tokyo is located on a tectonic fault that has so far been affected by major earthquakes every 70 years on average.