The Hartmann & Braun AG was a company of measurement and control technology in Frankfurt . It existed from 1882 to 1999, since then it has been integrated into the ABB group .

In 1879 the mechanic Eugen Hartmann (who later gave the Eugen Hartmann Prize its name ) founded a workshop for optical apparatus and mechanical and geodetic instruments in Würzburg . In 1882, the Kaufmann joined Wunibald Brown as a partner into the business that henceforth E.Hartmann & Co. called. In 1884, Braun arranged for the company to be relocated to the then still independent Bockenheim outside Frankfurt. The company soon switched to the manufacture of electrical measuring devices for physical quantities such as pressure and temperature .

In 1901 the company was converted into a public limited company. The previous one-off production of measuring devices was replaced by the industrial series production of switch panel devices. From around 1910 Hartmann & Braun also produced recording measuring devices, the so-called recorders , with which up to six measured values ​​could be recorded simultaneously.

A special focus was the analytical devices, which were manufactured from about 1930 to z. B. to detect trace gases . In the 1930s the company employed around 3,000 people.

Memorial plaque for the forced laborers von Hartmann and Braun

During the Second World War , Hartmann & Braun was a vital company. In 1941/42 a new plant was built in Praunheim , which employed around 1,000 people. The main factory of Hartmann & Braun between Graefstrasse, Falkstrasse and Leipziger Strasse in Bockenheim was largely destroyed in an air raid on February 8, 1944 , killing 165 workers. The new Praunheim plant was almost spared the effects of the war, but was temporarily confiscated by the American army at the end of the war. From the beginning of 1943 to March 1945, around 340 women, mainly from the Ukraine , Russia and Belarus , were used as forced laborers in this plant. A memorial plaque installed in 1995 commemorates the camp in Ludwig-Landmann-Straße . 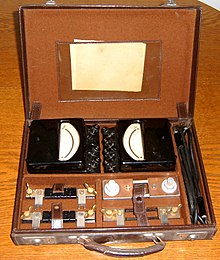 After the Second World War, the reconstruction began slowly. In the 1950s, however , the company quickly regained access to the world market and developed successfully, also through takeovers and investments (e.g. in Schoppe & Faeser GmbH in Minden ). In 1968 AEG took over the majority of the company, which had been largely family-owned until then, and in 1981 these shares were sold on to the Mannesmann Group.

In 1993 the two Frankfurt plants had around 3,000 employees. The technical development forced a reduction of the vertical range of manufacture . In 1995 the company was sold to the Italian-American Elsag Bailey Process Automation NV , based in Haarlem , the Netherlands . In 1997 the company headquarters was relocated to Eschborn . In 1999 Asea Brown Boveri AG took over the Elsag Bailey Group, with Hartmann & Braun being fully integrated. The holdings of the company archive are located in the Frankfurt Institute for Urban History . In 1997 the Historical Museum acquired the company's extensive collection of products and inventory items for its communication, technology and industry department in the 19th and 20th centuries .

The former H&B administration building on Gräfstrasse, built in 1954 (2015)

After Hartmann & Braun moved out, Mannesmann AG sold the 24,000 square meter company premises in Bockenheim to the Munich-based construction developer DIBAG Industriebau AG, which belongs to the Doblinger Group . The existing buildings were gutted from 1999 and the Alvearium (Latin for beehive), a building complex made up of offices and apartments, was built on the site .