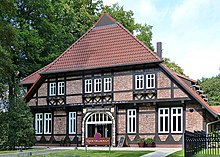 The house Kränholm is located in Bremen , district Burglesum , district St. Magnus in Knoops Park, on the Hohen Ufer 35A / Raschenkamsweg. The house was built in 1897 to plans by Eduard Gildemeister and Wilhelm Sunkel. It is since 2010 as part of the Memorial group Knoops Park under Bremer listed .

The two-storey half-timbered farmhouse in Lower Saxony with a crooked hip roof and was built in the historicist era north of the Bremen-Vegesack railway line near Lesum Heerstraße for the merchant Baron Wilhelm Kulenkampff (1852–1929) and his wife Emilie, born in 1897 . Knoop (1858–1920) built. Above the entrance as an archway it says on the wooden beam: “In Nord und Süd de Welt is wit. In east and west dat Hus is best ”.

The house is named after the island of Kreenholm in the Estonian river Narva . Ludwig Knoop bought the island and had a textile factory built there.

The building had to be removed when the federal highway 74 (now Autobahn 270 ) was expanded. It was rebuilt in 1971 as a reconstruction with a different appearance and reduced by one storey compared to the gatehouses of Albrechtsburg in Knoops Park. Older components were used here. A cottage garden , a model garden for shady plants and a half-timbered barn, which is used as a coach house, were built at the house. Nearby is the old Tillery house of Knoop's head gardener Tillery.

Today (2018) the house is used as a restaurant with the art café in the former head gardener's house and the barn as an event room as well as a neighboring sculpture garden . The Haus Kränholm Foundation manages the property.