House Order of the Golden Lion 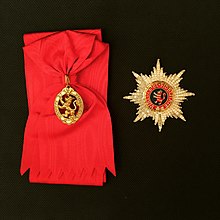 Breast star of the House Order of the Golden Lion

It was donated on August 14, 1770 by Landgrave Friedrich II of Hessen-Kassel in a class. The patroness was Saint Elizabeth of Hungary , ancestor of the founder. The Minister of State and President of the Higher Appeal Court, Leonhard Heinrich Ludwig Georg von Canngießer , was appointed the first order chancellor . The order was intended to reward and honor excellent services and as a house order . Elector Wilhelm I added three classes to the statutes of January 1, 1818. On August 20, 1851, the separate Wilhelmsorden was donated from the expansion classes from 1818 by Elector Friedrich Wilhelm I.

After the occupation of Kurhessen by Prussia in 1866, the house order of the Golden Lion was taken over into the series of royal Prussian orders. By decree of August 27, 1875, the order was deleted from the list of the latter.

After the death of the last Elector of Hesse-Kassel, the order of Grand Duke Ludwig III. taken over by Hessen-Darmstadt . He gave him new statutes on June 6, 1876 and installed him as a new grand-ducal order. It was equal to the Grand Cross of the Order of Ludwig. With the abdication of the last Grand Duke of Hessen-Darmstadt in 1918, the order was finally extinguished.

The medal consists of a crowned golden lion within a golden oval hoop on the obverse with the motto:

and on the lapel with the inscription:

The ribbon is crimson in the widths for sash , neck cross ( commander ) and pectoral cross (knight).

The knights wore this medal on a crimson ribbon, hanging from the right shoulder to the left hip and also an eight-pointed silver star embroidered with rays on the left breast, in the middle of which the red striped Hessian lion, surrounded by the on a blue background Order motto embroidered in silver on a red background.

Commons : House Order of the Golden Lion  - Collection of images