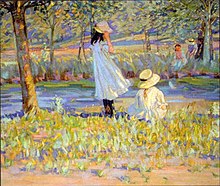 She is widely regarded as one of Canada's most important female artists and played a vital role in popularizing the Impressionist art movement in the country.

Helen McNicoll came from a distinguished Toronto family. She was deaf due to scarlet fever in her childhood . Despite her disability, McNicoll attended the Art Association of Montréal in 1899 to study art history under William Brymner (1855–1925) . In 1902 she moved to England to study at the London Slade School of Fine Art and later in St Ives (Cornwall) under the British painter Algernon Talmadge († 1937).

With her colorful pictures, which often show young women and children in nature and with a short brushstroke, capture light and mood, she made a significant contribution to making Impressionism known in Canada.

Helen McNicoll died at her cottage in Swanage at the age of 35 .

Much of her oil paintings are owned by Canadian art museums, including the Art Gallery of Ontario and the Musée national des beaux-arts du Québec . Some works are in private art collections. In the summer of 2019, the Kunsthalle München will show in the context of the exhibition In a new light. Canada and Impressionism their pictures In the tent and Sunny September .