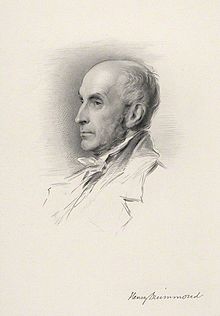 Henry Drummond (born December 5, 1786 in Alresford , Hampshire , † February 20, 1860 in Albury , Surrey ) was an English banker and member of the House of Commons . He became known as a co-founder and later apostle of the Catholic-Apostolic congregations .

Drummond was the eldest son of Henry Drummond, a respected London banker. From 1793 he was educated at the Harrow School. He then studied from 1802 at Christ Church College in Oxford . In 1817 he retired from his church, the Church of England , and joined evangelical circles. After the death of his father and the exit from his father's bank, he had a good income and therefore placed himself in the service of the revival movement supported by Henry Thornton , William Wilberforce , Thomas Chalmers , Edward Irving and James and Robert Haldane .

In June 1817 he went to Geneva with his wife , where he met Robert Haldane again and increasingly turned to missionary endeavors. Drummond had an influence on the Geneva revival movement, the Réveil .

In the years 1826-1830 he organized meetings of about 30 clergy from different churches and well-known lay people on his country estate Albury Park . The first conference on the 1st Sunday in Advent 1826 was an eight-day meeting to clarify the various interpretations of prophetic promises and the resulting end-time expectations through prayer and Bible study . The results of these discussions, the most prominent participant of which was Edward Irving , were published by Drummond.

Meanwhile, there had been charismatic revivals in Scotland and London . In June 1831, Drummond first heard of the spiritual gifts that had appeared . At first he examined them with skepticism, but was then convinced of their divine origin. Thereupon he initiated his own prayer meetings , which aroused the resistance of the local pastor and chairman of the Albury conferences, McNeile. Therefore, on July 29, 1832, Drummond began holding services on his estate with his family and around 20 like-minded people. In the first service the gift of prophecy emerged for the first time. On October 20, 1832, Henry Drummond was then called to be the “Shepherd” of the first Catholic Apostolic Congregation. Eleven days later, on October 31, 1832, John Bate Cardale was first addressed as an apostle .

On Boxing Day 1832, Cardale ordained Drummond as "angel" (= bishop ) of the house church of Albury, which was now allowed to celebrate the Lord's Supper . The local pastor, who was immediately informed by Drummond, again met with rejection. On September 25, 1833, Drummond was also called to be an apostle.

In 1836, based on a prophecy, Drummond declared that the apostles would be entrusted with the tribes of Israel . Each apostle was then assigned to one of the 12 tribes and given a work area. (This led to the development of the New Apostolic Office of Chief Apostle much later .) Henry Drummond was assigned the tribe of Benjamin, which meant Scotland and Protestant Switzerland .

Until July 12, 1836 he worked as the "angel" of the Albury parish, as the "pillar of the shepherds" and as an apostle. He was very committed to the expansion of the Catholic apostolic work and was able to plant a congregation on July 1, 1849 in Basel and on October 18, 1850 in Paris .