Thomas Chalmers (born March 17, 1780 at Anstruther -Easter in Fifeshire , Scotland , † May 31, 1847 in Edinburgh ) was a Scottish Reformed theologian, writer and the founder of the Free Church of Scotland .

Chalmers grew up as one of 14 children of a strictly Calvinist small business owner. He attended a college in St Andrews from 1791 and then studied at the University of St Andrews Protestant theology , mathematics , chemistry and astronomy . As early as 1799 he was admitted to the parish office, but initially did not get a job. So he continued his studies in St. Andrews and gave lectures there on mathematics. He continued this when he became a pastor in Kilmany in 1803 , because an academic career seemed more important to him than his official duties. To investigate the continental blockade imposed by Napoleon on the United Kingdom in 1806 , he also carried out national economic studies and published his first work in 1808: Inquiry into the Extent and Stability of National Resources . In 1810/11, however, under the influence of a writing by William Wilberforce , a leader of the English revival movement , he converted to evangelical piety. From then on he intensified his church work and campaigned for missionary and Bible societies .

In 1815 he was called to serve as a pastor at St George's Tron Church in downtown Glasgow . He campaigned for new parishes to be established in the industrial city, which was characterized by strong population growth, and in the fall of 1819 he himself took over the pastor 's office at St John's Parish Church in the working-class district of Kelvindale . There he established a new system of poor welfare, which should be based on the promotion of initiative and commitment. To this end, Chalmers divided the huge township into manageable districts, where lay volunteers made home visits and offered practical help. These men, in whom the old reformed deacon office was resurrected, relieved the pastor and the elders, who could concentrate fully on their pastoral work. The church's poor relief system could not be sustained in the long run, but its basic principles influenced the Elberfeld system and thus had a great influence on state social policy. The pioneers of evangelical diakonia in Germany, Theodor Fliedner and Johann Hinrich Wichern , were also under Chalmers' influence.

In 1823 Chalmers took over the professorship for moral philosophy at the University of St Andrews, where he mainly dealt with questions of national economy. In 1828 he switched to a professorship for theology at the University of Edinburgh . Here he became leader of the "evangelical" faction in the General Assembly, the legislative body of the Church of Scotland , and in 1832 served as moderator . His special commitment continued to be the presence of the church in the industrial centers, and so 220 new churches were built between 1834 and 1841. In 1834 he became a member of the Royal Society of Edinburgh .

As early as 1834 the General Assembly had tried to enforce a law that the parishes should have a veto right against unsuitable candidates presented by the patron saints when filling pastors. Chalmers was the leader of the non-intrusionists , who demanded the independence of the church against state power, because only Christ alone and no foreign masters are allowed to rule in the church. The House of Lords in London, dominated by the nobles, did not want to allow any restriction on the patron's right to appoint pastors. When all attempts at mediation had failed, Chalmers withdrew from the General Assembly with the majority of those present on May 18, 1843 (the so-called disruption ) and founded the Free Church of Scotland , in which he acted as the first moderator. About half of the members and a good third of the pastors joined the new free church, the structure and organization of which was particularly influenced by Chalmers. He gave up his professorship at the state university and in November 1843 was founding rector of the newly founded theological training facility of the Free Church (now part of the University of Edinburgh as New College ).

Chalmers saw the departure from the state church as forced, but rejected the principle of voluntariness advocated by the dissenters and other free churches. In order not to let the contrast between state churches and free churches become too deep, he founded the Evangelical Alliance from July 1843 . But he himself no longer took part in the founding meeting in the summer of 1846.

Thomas Chalmers had been a member of the Freemasonry Association since November 30, 1798 , his lodge St. Vigean 101 is located in Arbroath .

His writings comprise 38 volumes, most of which deal apologetically with theology , including his contribution to the Bridgewater Treatises . He was also seen as a stirring preacher.

His studies, which combined theology with the natural sciences and economics , had an invigorating influence on the Church of his time. 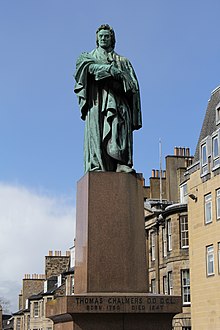 : Statue of Chalmers on George Street in Edinburgh

Chalmers had been married to Grace Pratt, the daughter of an officer, since 1812. His eldest daughter Anne (1813-1891) married the pastor William Hanna in 1836 , who later became his father-in-law's first biographer.

In 1878 a memorial was erected on George Street in Edinburgh with a statue made by John Steell . In the Hall of Heroes in the Wallace Monument near Stirling, there is a sculpture created by David Watson Stevenson in 1889. The New Zealand city of Port Chalmers and the Chalmers Memorial Church are named after him.