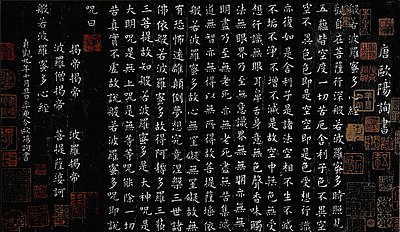 Heart Sutra written by Ouyang Xun , a calligrapher of the Tang Dynasty

The Heart Sutra or Sutra of Supreme Wisdom is one of the most famous Mahayana Buddhist sutras . It is one of the shortest of the Prajnaparamita texts and is considered to be their essence.

The full title could be translated as follows: The essence of the sublime reaching over to the other bank of wisdom (Sutra) .

The sutra is characterized by extreme brevity and precision, the calligraphy - see under web links - fits on one page. There are two versions (a longer and a shorter one), which agree in their teaching, but the longer text also explains the circumstances of the transmission. It is studied and recited especially in Zen . Sometimes the sutra in the Chinese version is written in the form of a five-tier pagoda with a long tip.

The Heart Sutra is also regarded as the concise summary of the so-called Prajñāpāramitā literature, a six hundred volume adaptation of the Buddha's teachings . Much of the Prajñāpāramitā literature was decisively shaped and commented on by Nagarjuna , the 14th Patriarch in the line of the Buddha, one of the first writers and philosophers of the Mahayana . The Chinese translation of the sutra is from Kumārajīva from 401 to 402. A later translation is from Master Xuanzang (Japanese Genjô) from the 7th century.

In the sutra, the bodhisattva Avalokiteshvara teaches the Shariputra about the transcendent spiritual experience. One of the key sentences is, in Japanese pronunciation of the Chinese translation: "Shiki soku ze kū, kū soku ze shiki", often rendered as "form is emptiness, emptiness is form". The core of the Heart Sutra is the mantra with which the sutra closes: "Gate gate Pāragate Pārasamgate Bodhi svāhā." This is also not translated in the Chinese version, but only reproduced in writing with Chinese characters. According to Edward Conze , the mantra could be translated as follows: "Gone, gone, gone beyond, gone altogether beyond, o what an awakening, all hail!" (Gone, gone, passed over, completely passed over, oh what an awakening, a perfect blessing! )

The Japanese claim to have the original Sanskrit script of the Heart Sutra in their possession. As Hannya Shin-gyō, which is itself an abbreviation for Makahannyaharamita Shin-gyō, translated by Kumarājiva (NJ 19), then Xuanzang (NJ 20). In the Japanese copy obtained from Tempyō 5th year (734) as "Herzenssūtra". Also copied as Hannya-haramita-dai-shin-gyō, in Tempyō 10 (738). As Shin Hannya-Kyō Hōki 3rd year (772). Therefore, the names often change in the literature. The commentary by Chikō Hannya-Shingyō-Shutsugi is a copy from the 4th year Shōhō (752). An early Japanese commentary exists from the hand of Enchins (= Chishō Daishi). In the 9th century the sutra was often offered (with others) as tendoku during earthquakes, epidemics, drought etc.

However, the Japanese Zen master Taisen Deshimaru Rōshi explains in his comment that the translation of kū ( skt. Śunyata ) falls short as a void . According to him, Avalokiteshvara is aimed at Shariputra as a symbol of compassion, who is considered a symbol of reason by showing him the impermanence of all things, whereby the attitude of always considering both aspects of an appearance testifies to compassion. Far from advocating nihilism (which a superficial interpretation of kū might suggest), teach the Heart Sutra the freedom from attachment that generates compassion.

In Korea the sutra is usually abbreviated: Mahabanya -para- mida- simgyeong → Banya-simgyeong (반야 심경: [paɲaʃimgjəŋ] ). It is probably the most widely read sutra of all. It is read aloud at every ceremony so that many temple-goers can memorize it.

The Tripitaka Koreana contains about seven different Hanja translations of the sutra with slightly different name endings. In addition to the full translation, there are also some shortened versions. In Korea, the translation is most widely read by the Chinese monk Xuanzang (Korean: Hyeonjang 현장) from the Tang period.